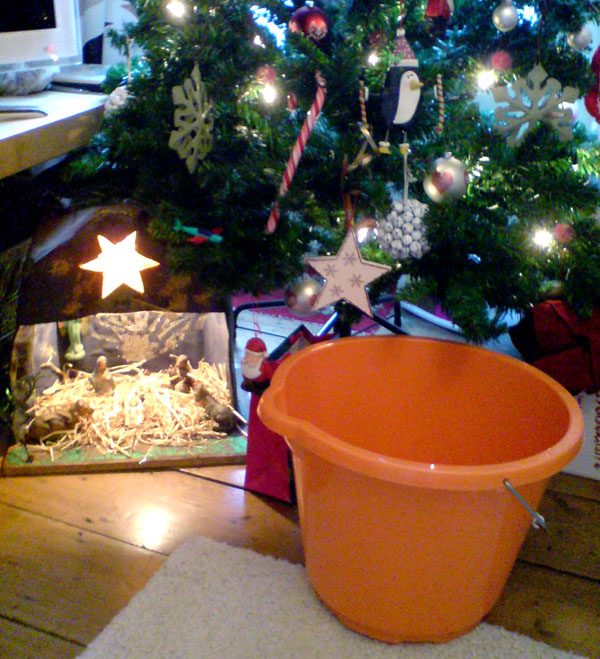 Just thought I'd start a log of my run of crap Christmases in order to try to break the curse for next year. This also goes out to all those people who didn't have a happy Christmas this year.

Pete started spewing on Christmas Eve around 11am. We thought it was food poisoning (or too many mince pies) until on Christmas morn around 2am I started with the projectile vomiting too. While all around us were tucking into amazing dinners and posting photos of their best presents, our Christmas Day consisted of both of us lying on the sofa looking at gifts we were too ill to unwrap, sipping water to rehydrate, eating a few bits of grated carrot and me with my head in a big orange bucket from B&Q. We had a fridge full of food – a free-range chicken, Yorkshire puds, veg, bubbly, wine, beer, etc – but nothing we could eat or drink, y'know like Lucozade. The tinsel, lights and redness of Christmas was making me feel feverish. And just when I thought it was all over, at 1am, I chucked again. Still unable to eat properly 48 hours later. That's the winter vomiting bug for you – a gift from Pete in revenge for Christmas 2009…

2009 The Fluey Christmas of Grief

After three months of rehearsals and a fortnight of performances in a chilly former factory in the back end of Birmingham for Birmingham Opera Company's Othello, we came to a sudden halt just before Christmas; the perfect moment for winter bugs to enjoy a festive dine on our immune systems. This time it was me who got the virus first before passing on the joys of muzzy head, fever, blocked up sinuses, runny nose and exhaustion to Pete. We overlapped at Christmas of course, sneezing and slumbering the days away on our separate sofas, too ill or exhausted to see another soul. We'd invited people round for an open Christmas, which we had to cancel – and promised to do it next year instead (not!). On top of everything my lovely Uncle John (the last of that Cullinan generation) died on Christmas Eve, leaving behind his wife and eight children, and many grandchildren. What's to celebrate when this happens? Christmas will never be the same again.

It was all going well on our traditional Christmas Eve meetup when in parting, I inadvertently stumbled onto one of those subjects that you know you should avoid. Cue big row with my (now former) BFF until at about 4am. Unresolved. Major upset. No sleep. Ruined Christmas day for both of us and with a knock-on effect for our families. Awful. No more Christmas Eve traditions. No more friends. Probably worse than this year's vomiting Christmas, which was physical but short-lived. Sad Christmases are the worst and I send my apologies out into the universe for causing one and also offer my sympathies for anyone else who faces a miserable Christmas for whatever reason. It was this worst and most alone of Christmases that made me want to have an inclusive, open Christmas in 2009. Maybe in 2011, it will finally happen.

Hope you had a good one.

Thinking of all those who didn't.

7 thoughts on “Christmas Wipeout No3”