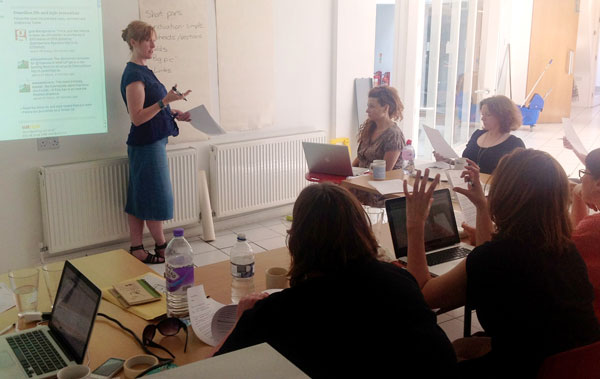 Kings Cross last Saturday – and I delivered my first-ever workshop. While the rest of the UK was firing up the barbecue to make the most of a beautiful sunny afternoon, seven sub-editors were arriving at the very cool Centre for Creative Collaboration to learn some digital editing skills. (C4CC is a brilliant neutral space that exists to foster collaborations between and help improve outcomes for freelance creatives. If you have a creative/collaborative project that fits the bill, I highly recommend getting in touch with them and putting in a proposal.)

My workshop project arose partly because I'd already been approached by a friend whose work was drying up. She asked if she could come to Birmingham for a day and just watch what I did as a web editor. A quick ask around some other friends told me she wasn't the only one who would be up for learning some online publishing skills.

But the idea was further kicked into life after the NME posted a sub-editing job at a below-industry-standard rate on the London Freelance sub-editors forum Subs UK. There was much consternation on the group messageboard with suggestions of setting a minimum rate for those seeking access to Subs UK talent, as well as calls to boycott the job offer.

Of course, someone snapped up the poorly paid work as people argued. Which just goes to show the current state of the freelance subbing market. Adding insult to injury, the NME person, responded to the negative backlash by posting a note thanking the 'many people' who had applied.

Something must have snapped. As someone who has struggled to find suitably skilled digital sub-editors, I posted Rates for the job – will they drop even further? on my copy editing blog, Subs' Standards, suggesting that it was pointless bemoaning falling rates in print and that time would be better spent skilling up in online publishing where budgets were inevitably moving. Then I said this:

"If we can find a venue in London (available on a weekend as I live outside of London), and can get a group of up to five subs together, would anyone be interested in attending a low-cost half-day digital skills workshop?"

More than 25 comments followed and many expressions of interest in learning about online work.

Mistake no.1 was thinking that it would be easy putting together a half-day course; after all, I've been blogging about how I made the transition to digital for quite a while now and doing web-editing for even longer.

But the reality is that 'doing' really is quite a different skill set from 'teaching'. There are projectors and cables and adaptors and system set-ups to negotiate – thank-you to Pete Ashton for his support on that front. The performance element is also a big deal as public speaking generally falls outside of the quiet production desk comfort zone, and I was quite nervous about having to stand up and lead the session. (Although I like to think I was role-modelling the need to step out of the print subs comfort zone.) Here I am crowdsourcing ideas on the nitty-gritty of structuring of online articles: 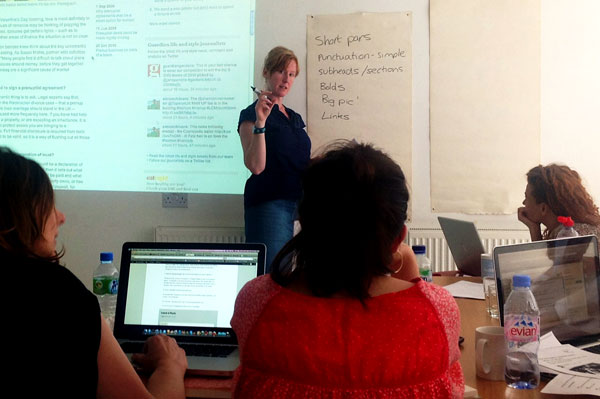 I think the workshop went well and feedback on the day was positive. Despite running over by an hour – mistake no.2 – with still more to say, we covered a lot of ground by using a real-life CMS upload as the framework for learning. And thanks to Pete's tech set-up, attendees had individual user logins to a CMS and a working online content environment.

For course attendees, it is often about getting a big download of fancy learning. Which I hope they feel they did.

But the bigger takeaway is to empower people to overcome their fears about change, give them the confidence to move forward into new areas and provide enough context so that they understand the 'why' rather than rote-learning the 'how'.

So it's all good. And it looks as if I'll be able to run another beginners course, with further options for one-to-one sessions or collaborative discussions on finding work and creating a new community of digitally minded freelance subs.

Which is what it's all about.

Meanwhile, for those who have read this far, here are my Online sub-editing workshop slides from the day.

UPDATE: Here's a Subs' Standards post for anyone interested in doing a course: Online editing and digital skills for print subs.