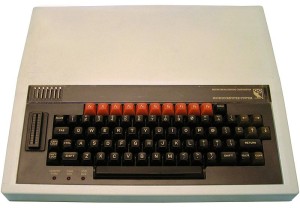 The first bit of code I ever wrote was a simple program in Basic on a BBC Microcomputer back in 1984 in the tiny school computer room next to the tuck shop. It did very little but ask me questions in a never-ending loop about my answer strings but I did think: ‘Blimey, that’s pretty cool. I got a machine to talk to me!’

I was rarely out of the computer room after that and told everyone I was going to be a computer programmer – and more likely a systems analyst! – when I grew up. (Pretentious, moi?)

However, my gender got in the way of such ambitious plans.

King Edward Camp Hill grammar school for girls only housed the computer room. The ladies of the fourth form couldn’t actually take a qualification in computing; only the boys from the school next door were allowed to do the coveted computer O’level.

So my mother and I booked an appointment with the headmistress: “This is the 1980s! We should have equal access!” Miss Percival, who spoke with a plummy Margaret Thatcher voice, just crossed her tweedy arms and fobbed us off… the lady wasn’t for turning. (Note: sometimes, when teenagers stamp and whine that it is so unfair, it genuinely is.)

Thirty years later – I’m re-igniting my schoolgirl dream. I’m a freelance digital content creator, sitting in a wifi café in Moseley and creating an Apple Developer account so I can download what I need to bash my way through the free online book, The Bastards Book of Ruby.

I get so far with the book – which is written by Dan Nguyen, a journalist in New York, and pretty accessible to me as a former journalist myself – but coding requires a very different headspace and I need a proper block of time to get to grips with it.

For anyone who hasn’t tried coding, it feels something akin to going from being an interior designer to a construction worker: you’re both building houses but the skill and mind set is completely different.

Rails Girls come to London – It’s a year later, April 2013 and I’ve landed a competitive place on a day-long crash course for interested beginners to learn to code using Ruby on Rails. Having only got to chapter two of Ruby on my own efforts, this was perfect. Rails Girls London’s idea was to put developers in a room with female, semi-beginners like me in order to learn the techy thing and create stuff in an environment supportive to women.

A fine idea – despite it ending in tears and anger.

I probably took the wrong turn at the first group divide. When the organiser asked for people with some experience, ie, “Have you ever used the command line to say Hello World?”, I put my hand up. Later I discovered that some of the other ‘beginners’ in my group were actually doing degrees in this stuff or had been playing around with different programming languages for years. Getting into the wrong group probably set me up for a fall from the start.

We started with an hour of online tutorial in Ruby – it was the equivalent of learning the building blocks of a language. Which was fine, and although I’m good with languages, I can only remember so much vocabulary so after 50 minutes or so, I realised I was just mindlessly doing what the tutorial told me to do and not really retaining anything. My brain was full and there were still seven hours to go.

Then it was on to the Rails bit – this is where it gets to be more fun my team’s mentor assured me. But that’s where things started going really wonky.

This may be because I’m the kind of person who asks ‘why’? (A lot. I do that for a living when people try to get poor web content past me.)

I couldn't get a grasp on the actual framework of how all the different coding windows worked with each other. I asked my mentor for some overview or context or an analogy to help me ‘get it’. But he couldn't think of one. So he passed me on to the organiser, who was really helpful but had to go and run the event, so he briefed another developer to pick up on where I was having problems.

I then spent another few hours one-to-one, going through theory and a few practical things – but again it ended up as the human equivalent of an online tutorial, with me just typing what I was told without really having any understanding of what I was doing.

When this happens, I tend to soldier on in the hope it will come right, but really the ‘you can’t do it’ voice is getting louder, and I can’t seem to quell the rising sense of failure/panic/tension. After that, it’s a quick hop to wobbly lip city. So when my mentor left me with a coding task, while he took a smoke break, I tried a few things but soon realised the whole thing was incomprehensible and really I’d rather be just about anywhere else where I didn’t feel so completely and utterly stupid.

I felt very alone. All around me the other groups seemed busy and looked as if they knew what they were about. The girl next to me, for example, had somehow created an app that scraped all the Twitter conversation from #railsgirlslondon and sent it to appear on a web page. Which was cool.

And the devs were obviously great at what they do – I couldn’t understand why I wasn’t getting it.

Don’t get me wrong, Rails Girls was a fantastic event for many of the attendees who did ‘get it’ and I met some very nice ladies there in the social bit of the event. Having not being able to code because of my gender, I am very sympathetic to the set-up that gives women the space to succeed as most did – or fail, as I did.

However, it’s a salutary tale and one I’m blogging about because I’ve recently started training and doing workshops in my own specialisms. And I find myself questioning how to check that my trainees have understood what I’m telling them, or how much to repeat so they get it (seven repeats is usual says my sister who is a teacher), or how many visuals vs text vs discussion vs exercises to put into a presentation.

If I learned anything that day it’s the truth of ‘those who can do, can’t necessarily teach’ and the expectation the event engendered of beginners being able to code in a day left me feeling bruised. I came out upset and unsure of whether to continue – which is the very opposite of the outcomes those running the event were trying to achieve.

I think I still want to learn to program but I’ve lost my coding mojo. I guess it’s back to teaching myself. Which, being self-taught on all things digital, is something I’m frankly getting a little tired of.

Typing this out a few months down the line, I’m reminded of similar meltdowns I’ve had when failing in other scenarios.

One was learning my basic motorbike training and feeling let down when the only people who were permitted to go out on the road at the end of the day were those who had ridden before and had come with their own bikes. No one else had passed the day’s training. I never did follow up on my training.

But the worst was when learning to Scuba dive in 2007. My first dive out of PADI training was run by a guy who took me 5m deeper than I was qualified to dive, against a strong current, where I went through an out-of-air experience due to over-exertion. It was an experience that put me off diving for five years until I finally re-did the training and started all over again.

So this is partly about me, how I learn, how I cope with failure and whether to get on the bandwagon again (I'm not looking for encouragement by writing this by the way). But it’s also about the value and skills of teaching and being able to meet learners where they are at and understand how they learn. Because if you get that wrong at an event or training session, the consequences can be debilitating, and even crush a schoolgirl’s dream.