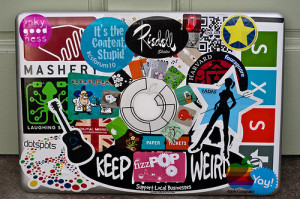 It's been a pretty busy and fruitful year on the work front – bar the occasional CMS-fuelled RSI resurgence, which I've mostly resolved by working at a stand-up desk since September.

As well as postural changes, there's been a promotion, a lot of public speaking and the setting up of a new company. More on all of this below…

Promotion
Since 2009 I've mostly been a digital content creator, editor and mentor. In January 2013 I started working under the title of Digital Content Strategist, which essentially involves sorting and analysing existing content and thinking how future production can produce content as a business asset. 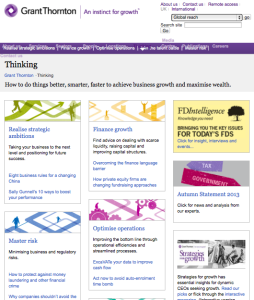 While I've been skilling up in content strategy since attending SXSW Interactive in 2009 and Content Strategy Forum in Paris in 2010, this was the year I helped carry out a major content strategy review followed by the content migration of four years' worth of multiple blog content to a new platform and structure. Here's the result: Grant Thornton Thinking section. I particularly like the article interface – example here – which provides lines in to various parts of the business by using metadata to create multiple links. Still a few technical niggles to sort but it's a fantastic digital publishing space.

Presenting
I spent most of January/February in London to implement the new content strategy role. Part of this involved training staff in digital skills and helping manage the organisation's shift to digital. 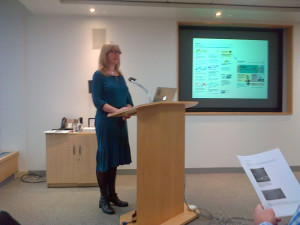 This has been the biggest step-up of all: learning to create a training programme, stand up in front of others and encourage digital transitions in the workplace. I couldn't have done this without the help of Helga Henry at Creative Shift, who runs a company that fuels personal and business development. Helga gave me some useful tips last year on how to keep calm and present well that have stood me in good stead when dealing with nerves.

I also used my time in London to check out the coworking options – and can recommend Google Campus as an option if you're in the Old Street area.

Programming fail
Something that didn't go so well was trying to learn to code, which has been on my agenda for a year or so. After teaching myself Ruby to some extent, I applied for a place on a Rails Girls day workshop. While most attendees seemed to benefit, I had a pretty bad experience  albeit one that has taught me a valuable lesson when it comes to teaching others. 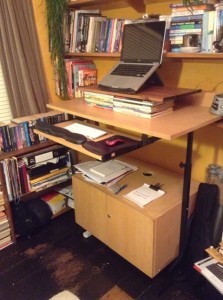 2013 will also be known as the Year of the Standup Desk. After a bad bout of RSI (repetitive strain injury) this summer, in which I nearly had to stop work completely, Pete suggested I try standing up while computing.

So I found a suitable height-adjustable desk on eBay and set it up as ergonomically as I could. I didn't think I'd last an hour but apart from a slightly achey back and feet, I felt more energised and my neck and shoulder pain eased almost immediately. It's hard on the feet but music helps and now I'm semi-dancing as I work.

Worth a try if you suffer from neck/shoulder/wrist strain from keyboard work. I blogged my first couple of weeks in a Storify here: Life at a standup desk.

Progression to Ltd
On 19 December, I finally went from sole trader to becoming a limited company. From January I'll be trading under the title The Subs Desk and, in time, I hope to develop this into a scaled version offering editorial services, content strategy and general online publishing support for clients and agencies. For now, though, the next step is to get TheSubsDesk.com website up and running.