Tl;dr: unfit middle-aged Brummie woman with lifelong surfing obsession fulfils dream by not standing up on board. 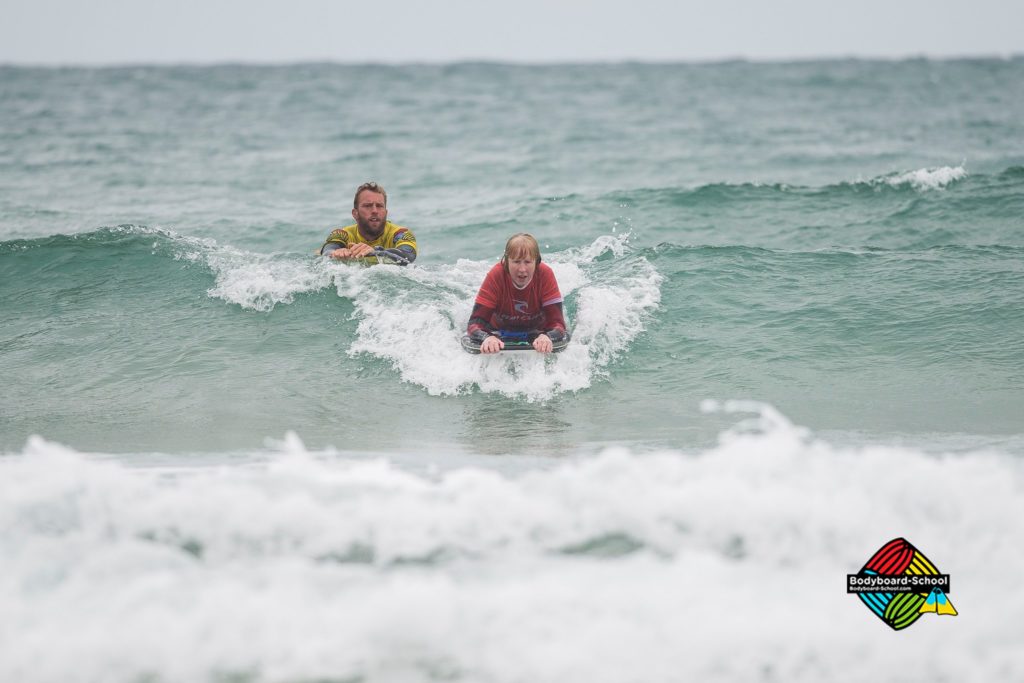 The challenge has always been to surf. It's been on my bucket list for as long as I can remember fuelled by seeing early skateboarding films in the '70s. Then came movies such as Big Wednesday, The Endless Summer, Blue Crush, Lords of Dogtown and the oh-so-quotable Point Break. I even read books: Andrew Martin's cult classic Walking on Water was particularly inspiring as (like Keanu in PB) a fellow journalist gets the ultimate assignment – he'll be paid to go surfing, in Hawaii, for The Times. 'Awesome.'

Then came the moment of truth. In 1999, I spent my backpacker pennies on a two-hour surf lesson at Byron Bay, Australia's most easterly point. And it worked. I caught a single wave, stood for a good few seconds and felt like a god. But, battling the tide, waves and my teensy biceps and RSI injury, I never got the strength to lift my carcass up fast enough to catch another. It was one of the most disappointing days of my life – having consumed so many surfing docos and films, I couldn't understand how I wasn't an absolute bloody natural.

Fast-forward to 2016. The grim reaper has been having a field day this year – David Bowie, Prince, Maurice White, Muhammed Ali, Alan Rickman, Wogan, Corbett, Victoria Wood, Caroline Aherne, and it's only July – and my do-before-I-die bucket list is on my mind. I want to surf but I can't. I have the upper body strength of a sickly Victorian child, so it's just never going to happen.

Cue lightbulb moment: what if I don't have to stand up?

A few Googles later and I've found a couple of UK bodyboarding holidays, mostly run by an outfit based in Newquay called, um, Bodyboard Holidays. Initially I'm not sure about them – it seems hard to get answers to some basic questions, like where exactly is the Cornwall Bodyboard Camp accommodation and how do we get around without a car and is the kit included and is there somewhere to lock up our tech in the camp?

But it turns out, the bossman with all the answers is Rob Barber, the UK's Senior British Bodyboard Champion, and he is away running a trip. On our weekend, everything is very slick and professional and we are well taken care of. You can read their blog post about the June bodyboard camp here – be sure to check out section four (not sure what happened to section five on the five-point list but…).

I'm thinking of pitching this one to a magazine (probably Saga, given my age and that I wasn't the oldest there) so I won't blog it too much, but it was epic and doable and, although tiring getting past the breakers, it was pretty low-impact exercise. Here's the moment from my diary when I caught my first wave:

'PADDLE! PADDLE! PADDLE! PADDLE!' shouted Rob the instructor as he turned me into the path of an enormous wave, building in power and rising up behind me like a Hokusai tidal wave, complete with a fringe curl threatening to break right over me and push me down into a spin cycle.

The wave was the second or third in the set: the cleanest, most powerful waves to catch – 'bigger is better', like faster is more stable when riding a bike. But the swell that day at Porthtowan was nasty with an on-shore wind (bad) that was causing the waves to topple early. I felt a shove from Rob and paddled my fins as fast as my sedentary city legs could move them.

And then it happened. I was picked up and hurled forward. Rob's instructions kicked in. I locked my arms to level the board and lunged forward into the back-arched forward position with hips on the board to prevent drag. I remember screaming 'WOOHOOOO!' and riding this water catapult past my husband and other learners, until its power finally petered out somewhere near the shore.

It felt surprisingly powerful, like F1 on sea. Ok, so my wave may only have been 3-4ft in reality but hey, travelling at any speed of wave is incredible. And – for a middle-aged sedentary microserf with bingo wings and neck, shoulder, wrist, knee and ankle problems – nothing short of a miracle.

Now I just had to learn how to turn and trim my position for '100% pure adrenaline' and 'long workable rides' and 'to catch my first tube' (and all the other Point Break quotes I could think of). 'Bodyboarding's the source. Can change your life. Swear to god.' 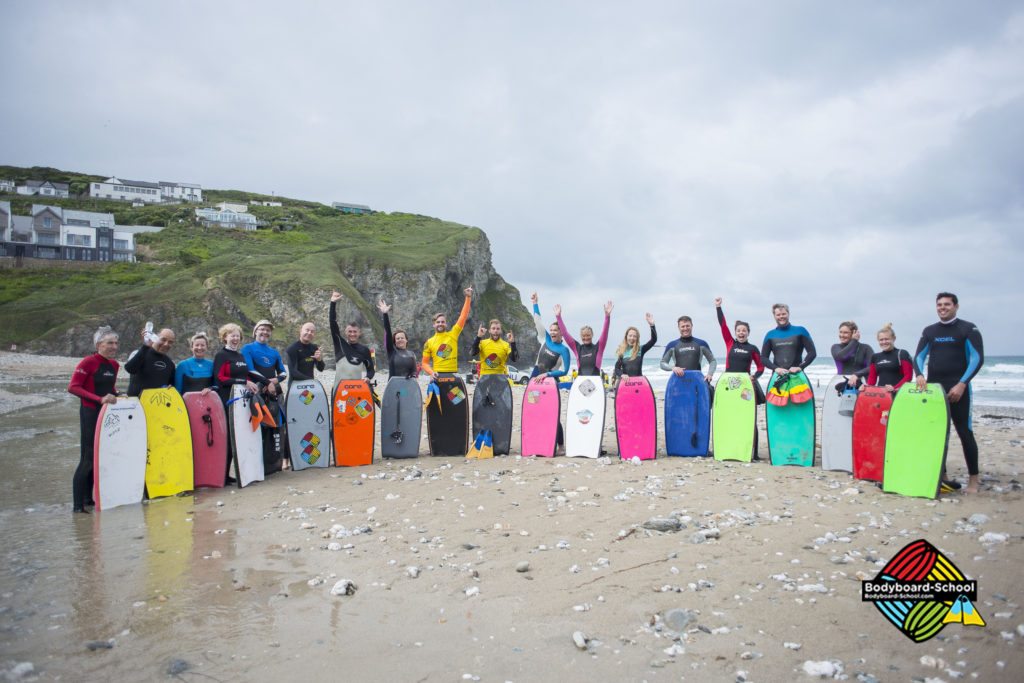 And here's the husband (who's not normally a smiler): 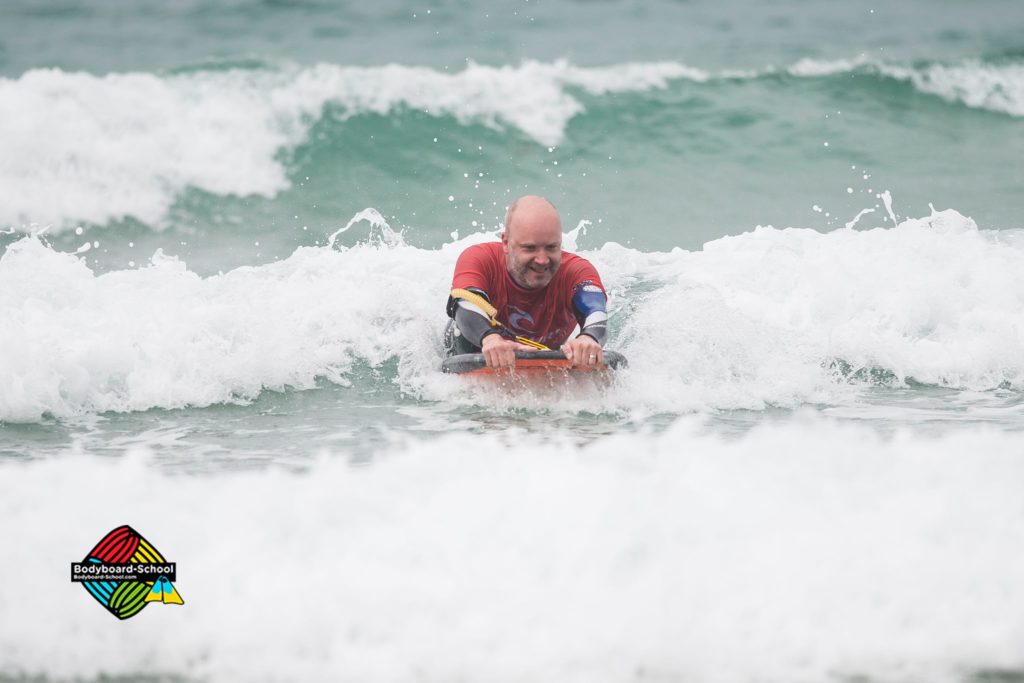 And just for LOLs, because Photoshop… I love the symmetry of this: 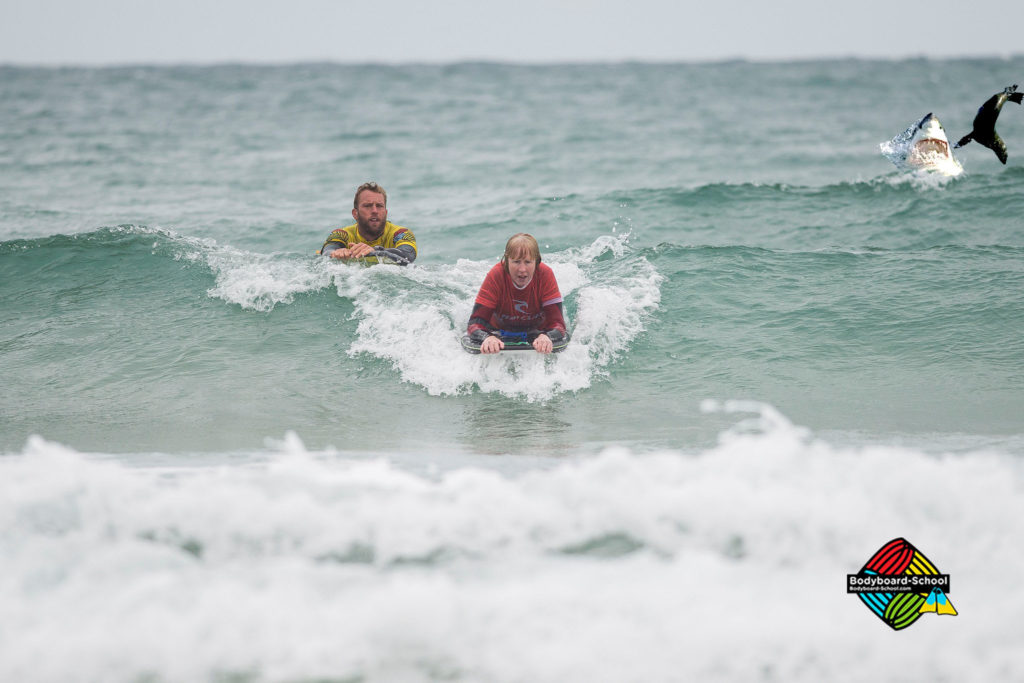 All photos © Bodyboard Holidays, who take photos and videos as part of the training and feedback sessions.

Thanks Rob, Brendo, Jo and Wazza for a great weekend. Hope to be back for more punishment (sorry, fun) at some point.