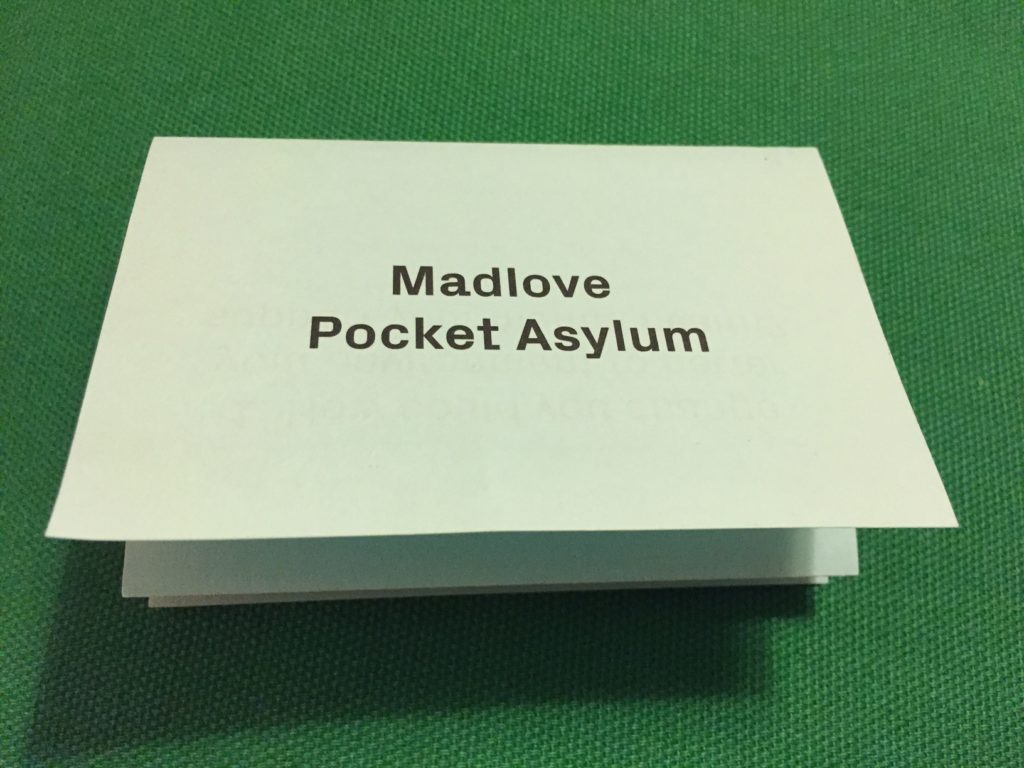 I caught the Bedlam: the asylum and beyond exhibition at the Wellcome Building in Euston, all about mental health and how it was treated – in asylums featuring metal collars, chains, straitjackets, ECT, teeth removal (and other innards), pills, art, talking therapies and, well, pretty much anything, with the inmates occasionally providing a weekend entertainment freak show for visitors.

In sharp contrast at the end of the collection, the requests of those with mental health problems were listed through the five senses what they would like to experience and what their ideal day would be like. The answers were things like: snuggling an animal, going for a walk or swim, having nice food, doing some gardening, smelling flowers, listening to their favourite music, meeting friends, sleeping with pleasant (or no) dreams. Essentially, normal things. In fact, the kind of normal things you want when your work-life balance is out of sync and you are feeling a bit head-full. Which is obviously a topic of great current interest to me.

The show finished by asking questions such as: Is it possible to go mad in a positive way? How would you create a safe place in which to do so? If you designed your own asylum, what would it be like?

One of the responses came from artists from Madlove.org.uk who provided a 'pocket asylum' with three questions for attendees to answer and take away:

Followed by an exhortation to "Read in the future as required".

I think my answers would be:

I don't know why I'm posting this particularly, apart from the Wellcome Trust always puts on a good exhibition that packs a tonne of information and things to think about (their 'Death' one from a couple of years ago was fantastic).

But also I suppose because this is something that has affected me and many people I know. Anyone can be affected by mental health issues and vulnerable at different times of their life – and my experience has ranged from drunken earworms that have driven me to madness in my sleep (Spanish Flea by Herb Alpert was the worst) to an extended depressive episode caused by complicated grief which meant I couldn't stop crying (mostly at really inappropriate work times) to having visual hallucinations for a few hours after experiencing something traumatic. And that's just me; for two years I was in a relationship with someone who was bi-polar and with multiple personality disorder (now known as dissociative identity disorder). The mind is a delicate and fascinating thing. So I guess that's why I'm posting this. It's been on my mind. I might have to write about this some more. Or not. We'll see.