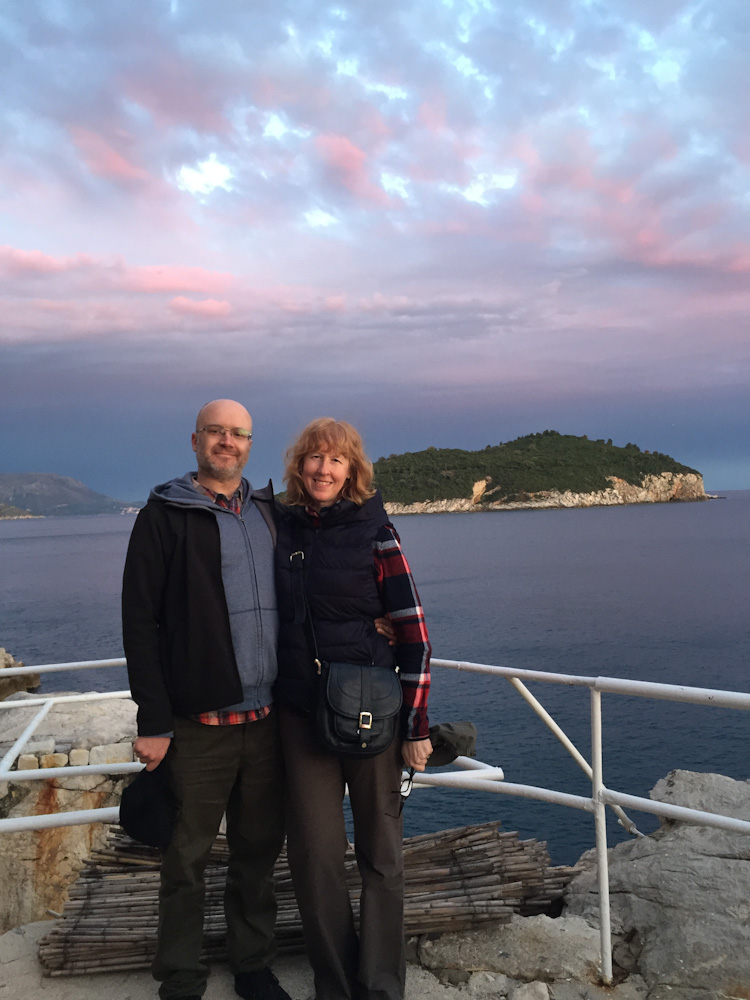 It’s raining heavily on arrival in Dubrovnik and it’s freakishly cold. We are wearing all the clothes and hats. This is not the only shock. The taxi from the bus station to Ploče charges a £12 set fare to go a couple of km, it’s £18 just to walk the town’s bloody walls – that’s each – and, worse still, a medium glass of so-so wine costs £7. Come back Zurich, all is forgiven.

“Everything is better is Croatia,” my Croatian 'sister-wife' Anita, the UK-famous inventor of the chocolate crumpet, repeatedly tells me – and I want to believe her. An old guidebook tells me the walls cost only £3 for access not so long ago, so this is probably the Games of Thrones effect. There really should be a different Dubrovnik price for non-GOT fans.

Being British, we of course mention the weather to our host Stijepo at Apartment Love and Hope and thank him for waiting for us in the torrential conditions.

“I would be happy if this was my biggest problem!” he exclaims, several times – a reference to being caught up in the 1991 Siege of Dubrovnik with no electricity or water and weeks of bombardment by Serbia/Montenegro. After that, we pretty much shut up about the weather and the price of bread.

Once the storm clears, it is indeed truly lovely inside the Unesco World Heritage Site of Dubrovnik, so clean. I mean, really clean. (Well, all that tourist money has to go somewhere I guess.) We enter it at sunset so that we can immediately leave it, as Stijepo has sent us for a sunset drink at Buza, a well-known drinking hole on the rocks outside the wall. Pete nearly chokes on his £6 GOT-priced Leffe but it’s the view we are paying for and a ringside seat for sunset in the Pearl of the Adriatic. 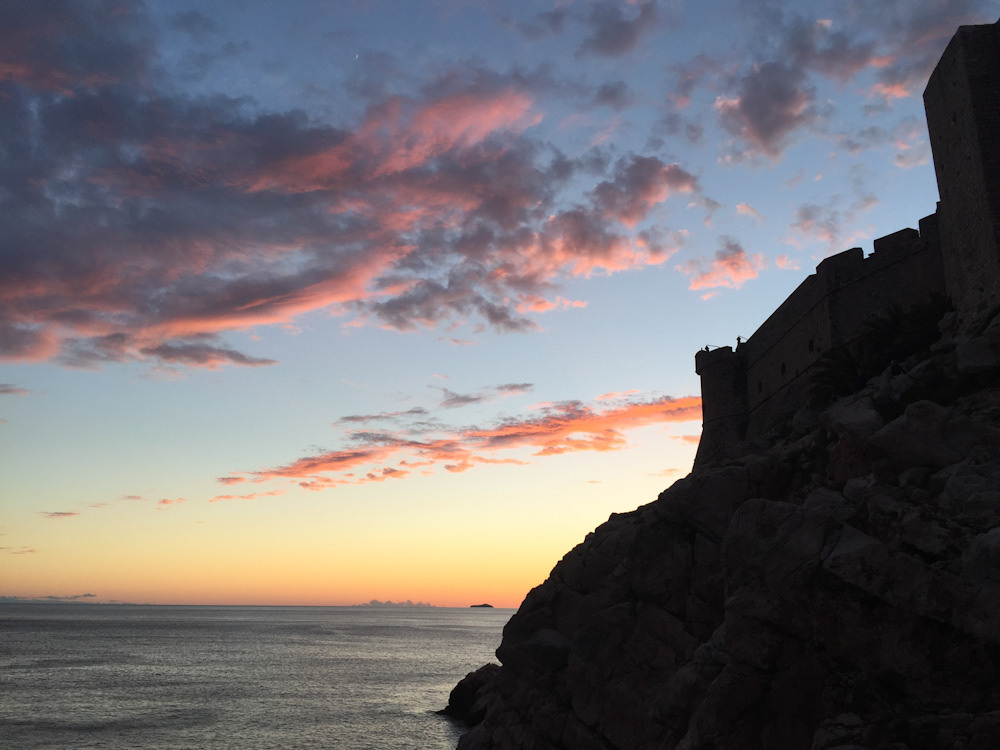 Stijepo recommended this nearby island as a lovely spot for a picnic, with botanic gardens and an old fort – but, who are we kidding, we mainly go because he told us there were loads of friendly rabbits roaming freely about there. There are. Here is a bun the size of a banana… 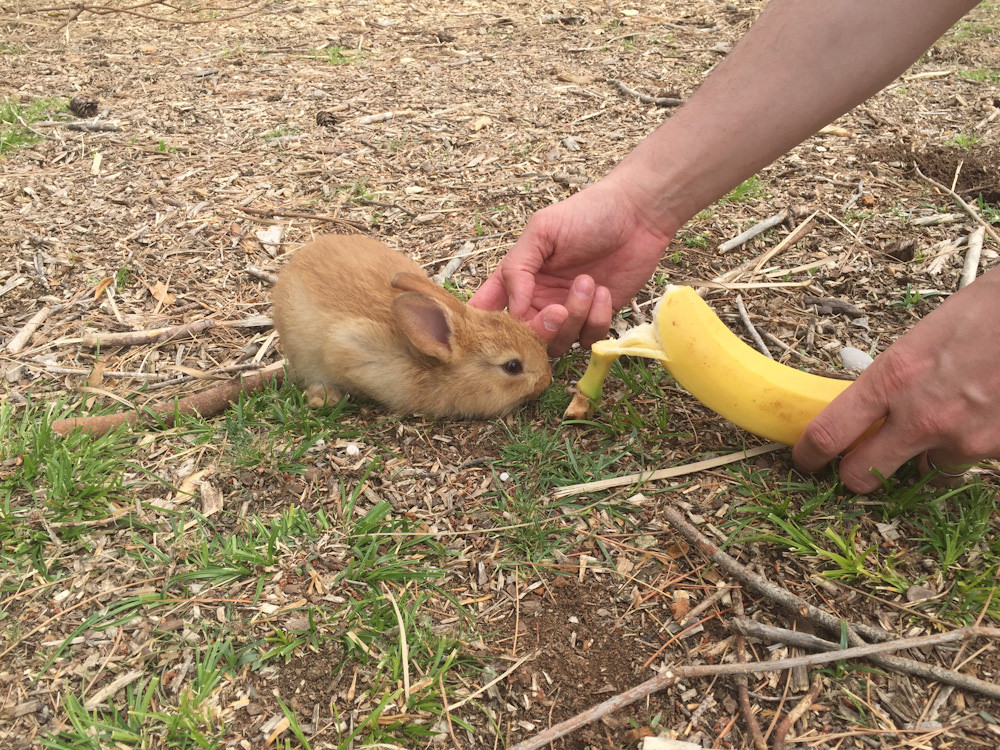 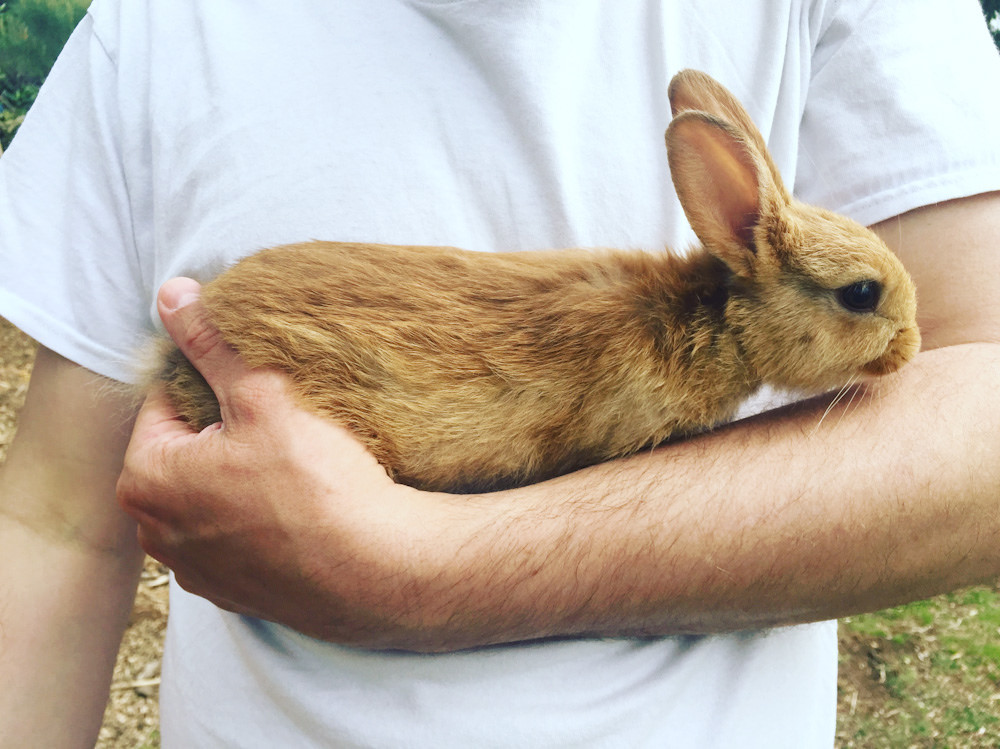 … and also an array of randy peacocks parading and trying to win over peahens to the point of fighting. 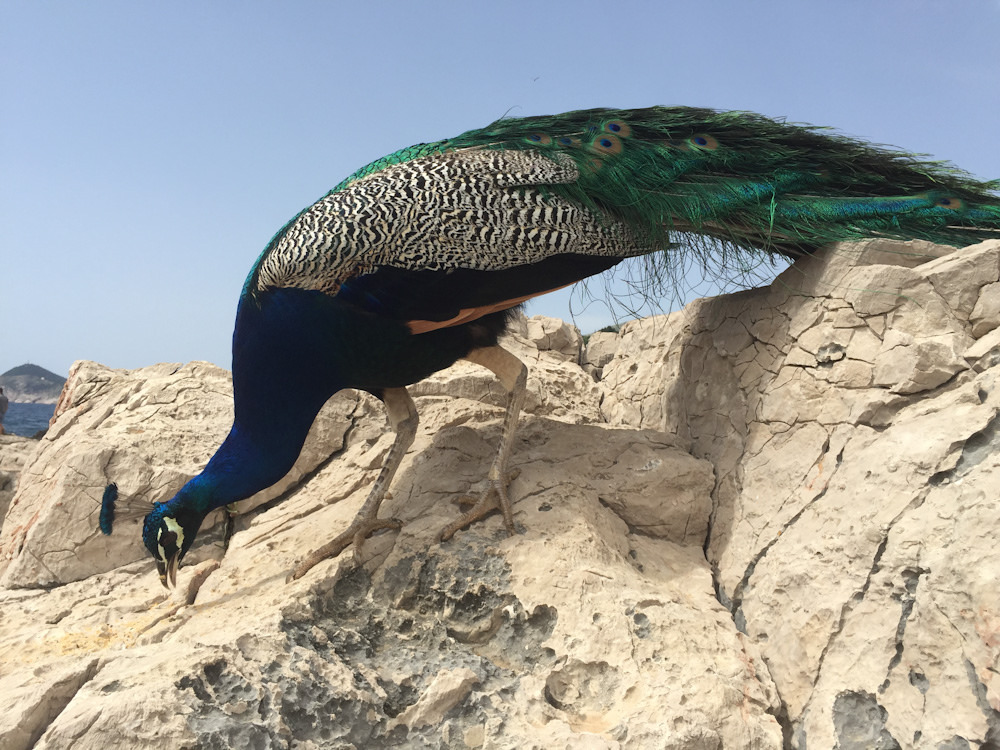 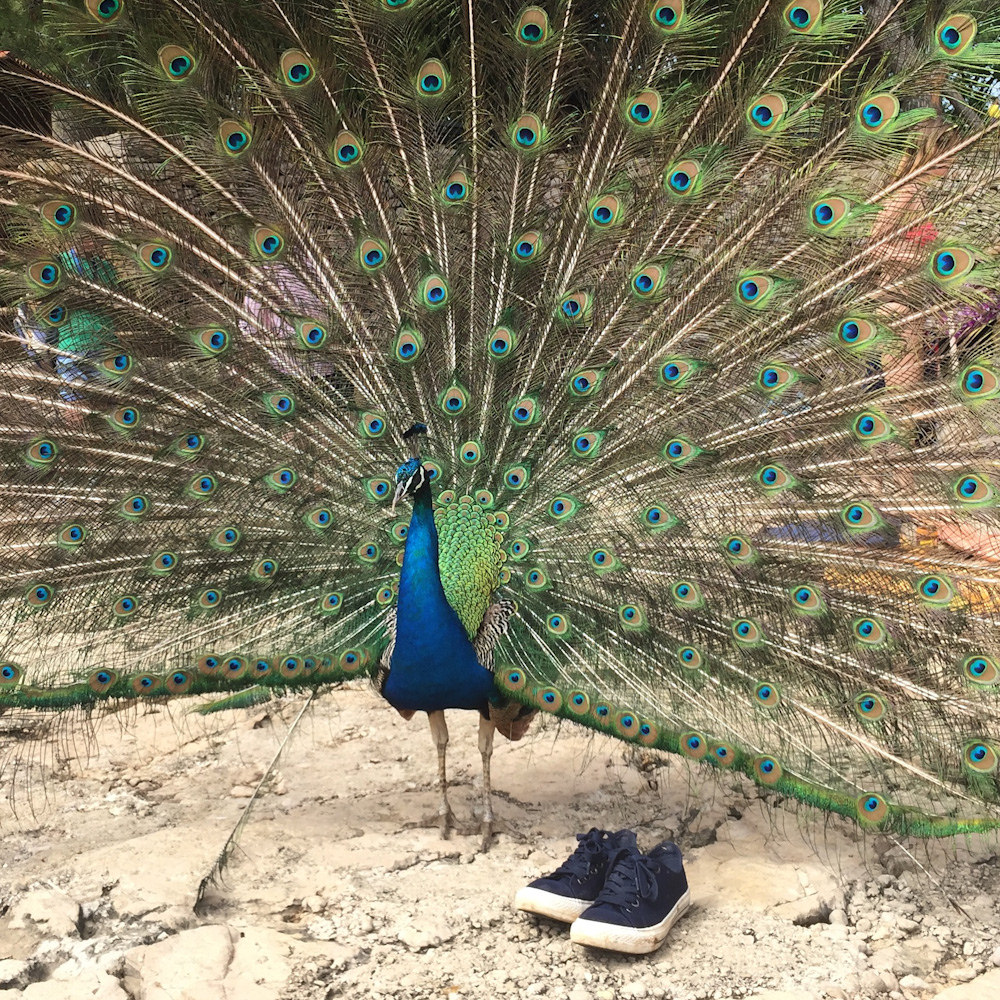 It’s quite something to watch baby bunnies hopping around giant prickly aloe vera succulents while peacocks shimmer and shake erect feathers next to the deep blue Adriatic. Only unicorns could have topped off the fairytale if anyone has Photoshop skills to add one here… 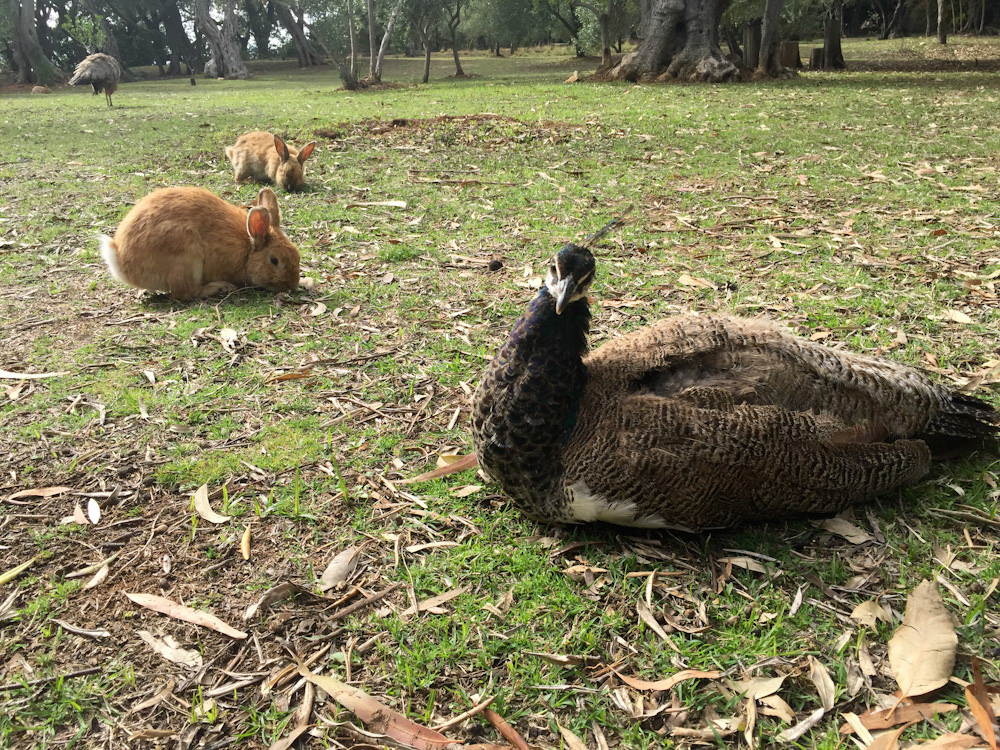 We check the cruise ship timetable and head into the Old Town as the passengers leave. After a picnic on ‘the outside’ wall by the harbour, we randomly bump into Hannah and Myk who, being super-speedy Americans, have caught up with us despite leaving Belgrade four days later. Their Podgorica train journey, taken on May Day weekend and packed with students heading back to Montenegro, makes ours sound a Four Yorkshiremen sketch – luxury. The next day Mark from the Belgrade apartment will fly in as we fly out. More travel connections in time.

We buy a Ferrero Rocher-flavoured ice cream from Stijepo’s recommended childhood ice cream parlour Dolce Vita and sit once more outside the walls, on a tiny beach that has the most beach glass I have ever scavenged in my life. You know when you start a collection and become enslaved? Well, mine is a worldwide beach glass collection and this tiny beach just tripled it – as well as producing two rare pieces in blue. 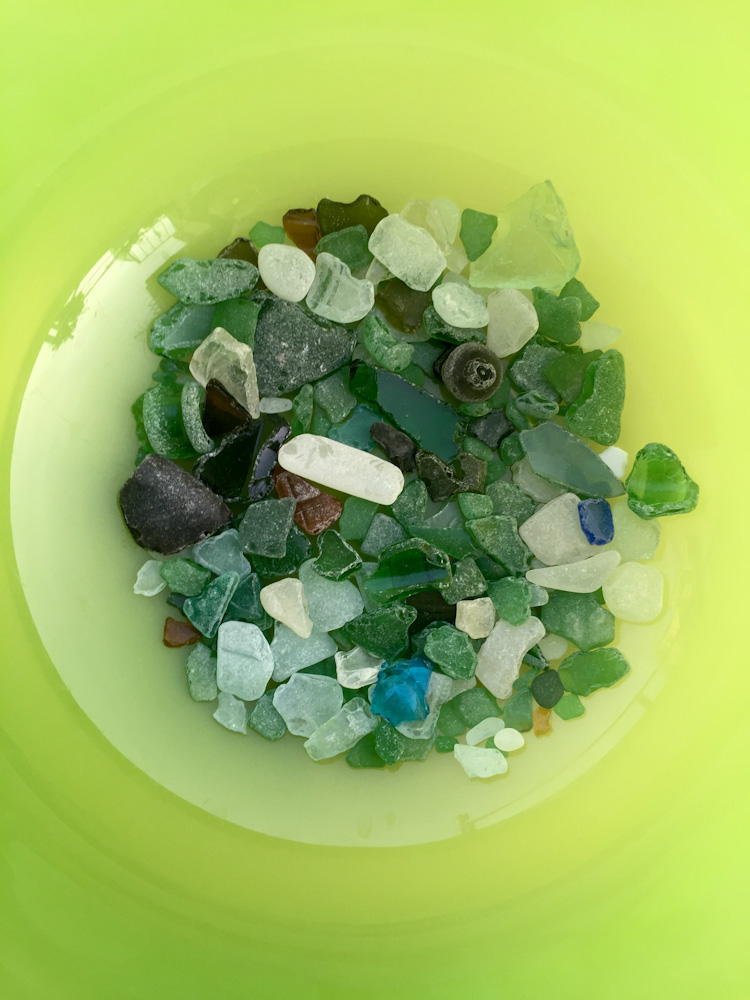 Pete and I discuss biting the tourist bullet and paying nearly £40 to walk the 2km city walls but it comes down to this on our last day – we can either walk or eat. So we eat: a tuna pasta and beer and wine and chocolate feast on our Love and Hope balcony overlooking beautiful Dubrovnik. 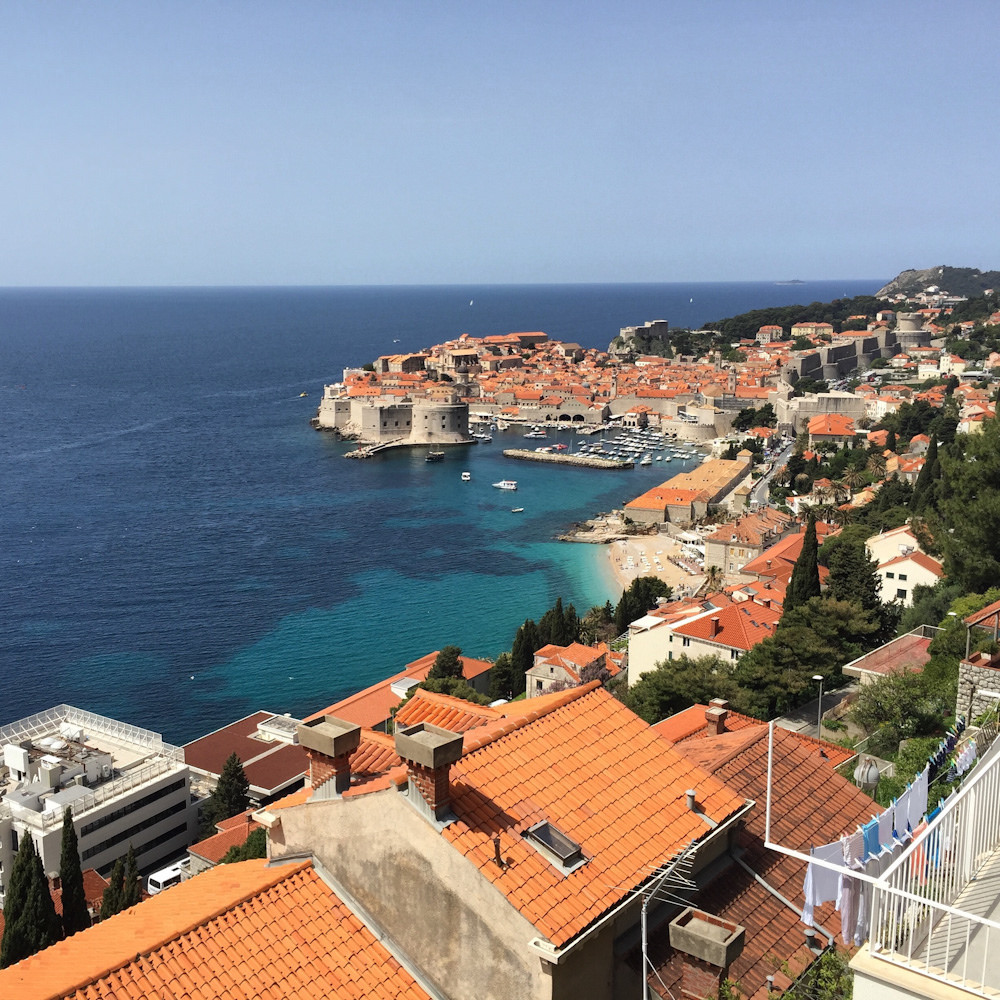 A male voice choir carries up the steep hillside from Banye Beach as the sunset does its glorious hazy coloured spectacle thing, and we have a little last-night-of-the-holiday dance on the terrace because we're married now and it's legal.

I may not be as enamoured of travelling as I used to be, and I can't wait to see our own little floppy-eared dudes and the rest of the human-eared family, but I sure could do with a little bit more blue sky, sea and sunshine in my UK life to be happy.

Perhaps everything is better in Croatia after all.

</The end of the Balkan blogging beast. Thank you for reading. Hope you enjoyed it. Other blog posts are available. >