Panic at Kelenfold Station – it is 10.55, the Beograd train says 11.04 but I was told it leaves at 11.37. I run with my backpack up the stairs to the ticket office where a man tells me “Table! Watch! Number!” increasingly slowly and loudly before finally writing it down and slamming it up against the window. “TABLE! WATCH! NUMBER!”

In case the Avala is leaving early, I run to platform 14 down this corridor… 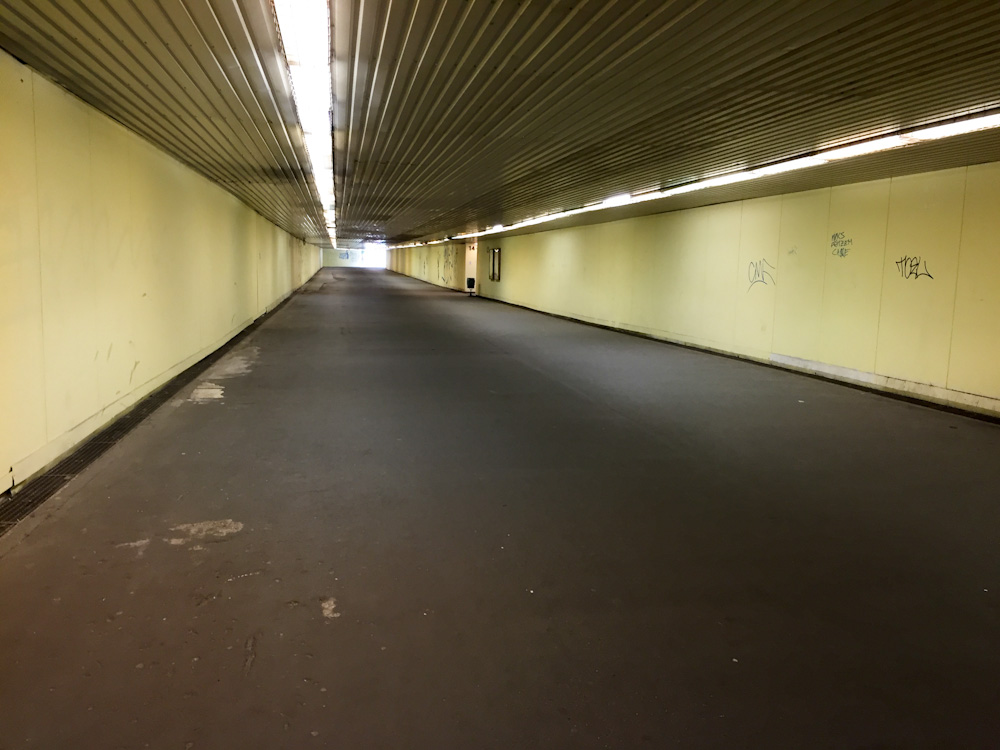 Thank God for Milos Rabbit (amazingly his Serbian surname translates as rabbit) – an English-speaking Serb with a Thai wife who works in Vienna but is on his way to the border to see his mom and also visit the dentist. He explains that 11.04 is the arrival time (which makes no sense) and that we shall leave at the appointed hour, (which we do).

It is only 15 euros to travel for nine hours on the Beograd Special from Budapest. We talk for five hours straight – about Brexit, NATO, Putin, Trump, North Korea, China, and where to go in case of nuclear war (New Zealand). Also infosecurity, as he is an IT manager. And how I mustn’t panic when the train tilts after Novi Sad and the rickety bridge after that – "Don't worry, it’s normal." He gives me his number to call in case I need anything translated once I get to Belgrade.

At the border, we sit on the train for an hour, traverse no man’s land, then enter Serbia. “Welcome to THE LAND OF MAN!” he announces.

“We’re not in the EU anymore!” I add, and nearly burst into tears at the double meaning. 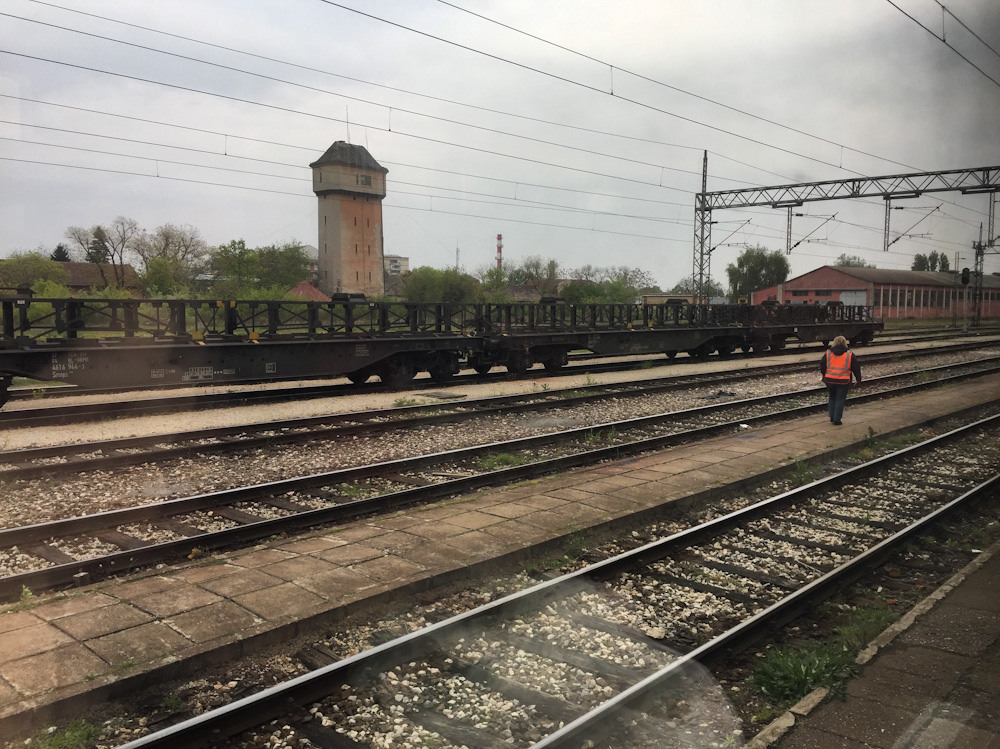 I see flat farmland, a horse-drawn plough, old women working iron machinery, bombed out buildings, chickens, goats and snoozing farm dogs, backyard subsistence crops, and maize flowers growing up through the tracks. I’ve been told that Serbia is a bit ‘Wild West’ but I thought because it was struggling post-war not because it is actual frontierland.

“Serbs are direct, honest and very hospitable,” says Milos. “But also they don't care. If people in Serbia cared, it could be a great country. But we would rather be poor and free.”

After Milos leaves, I head for the white tableclothed dining car to spend my leftover florints. I have enough for goulash and a Chardonnay. I am the only person in the dining car. The chef puts his book down and shows me various plastic wallets of food before firing up the microwave. 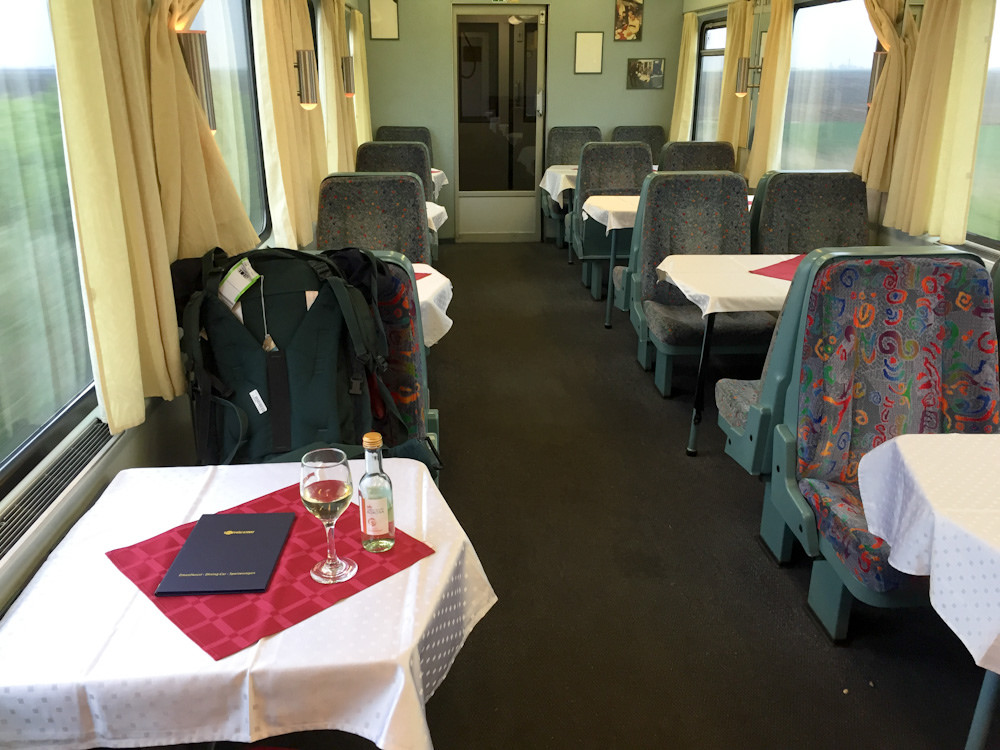 Arnold, the subversive industrial-music-loving, spiky-grey-haired Hungarian chef, gives me a free beer once I’m done and we chat as darkness falls, all the way into Belgrade. The train is late once more and we toast Mr Popovic of Wasteels Travel Agency, who is waiting for me at the other end to pay for the next set of tickets to Podgorica. Poor Pete is not toasted as, being the husband, he has to be there to meet me. The conversation gets drunker and the toasts more frequent, and I arrive quite merry into Belgrade thinking how very wonderful solo travel is.

Sadly I don't get to meet Mr Popovic as Pete has already paid him and collected the tickets by the time I arrive. I’m told he looked suitably like a kindly gnomish owner of an antiquarian occult bookshop, but taller. Later, I arrange to buy him a Lottery ticket as a thank you for waiting. He says, if he wins, he will buy a new car. I love Mr Popovic.

Pete, meanwhile, is in a panic after asking when the train from Bucharest came in and being told to go to the other side of the city. 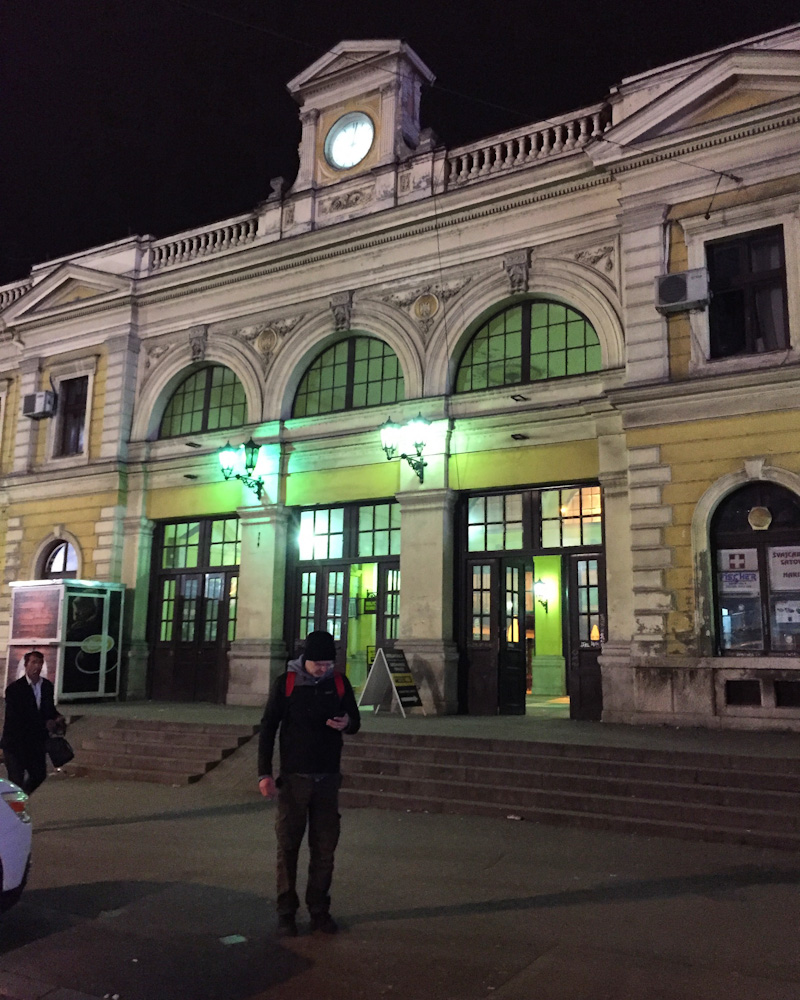 I had thought Belgrade would be flat being by the Sava and Danube rivers but he walks me up, up and up into the old town area, through higgledy-piggedly barely lit streets and broken staircases. The hill finally plateaus into a pedestrianised high steet with al fresco seating. But the tone has been set. Belgrade reminds me of the Birmingham Bull Ring in the gritty 70s, and I feel safe and strangely at home.

The lift to ‘WOW’ Apartment is decrepit and clanking; its walls lined with molten effect something or other. It drops down half a foot when we enter. Despite the shady common parts of the block, the apartment itself is indeed very wow with a giant chaise longue sleigh and dark bachelor pad colours.

I meet Mark and Dom, who are also here for their fifth Resonate festival, but all anyone can talk about is how bonkers Serbia is, from the supercheap prices to the meat dinner lurking at the bottom of a pasta dish to gigs in old abbatoirs to the 1970s Brutalist Western City Gate crazy architecture.

I’m happy to be back in the land of conversation. The solo first half of my trip is over. Now for 'the holiday'.

(Mr Popovic and I do not win the Lottery.)