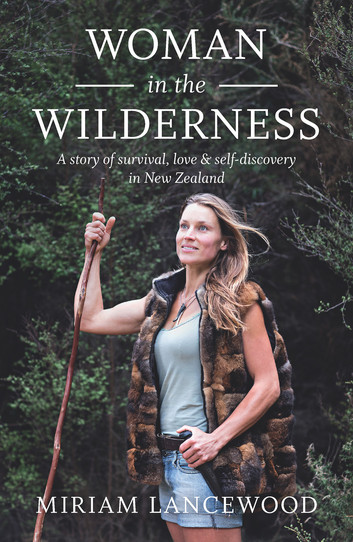 I got this book for Christmas as a surprise gift and while personally I don't even like camping, it has been interesting to live vicariously through someone who has gone off the grid and lived as a pretty wild woman.

While Miriam’s book ‘Woman in the Wilderness’ doesn’t contain the thrills or the personal overcoming of adversity of Cheryl Strayed’s ‘Wild’ (or Strayed’s writing skills – something Miriam freely admits), theirs is a quieter, ongoing feat which downplays the endurance side and spearheads the lifestyle change and how living in nature affects how they think and feel.

In the process of becoming a modern nomad, Lancewood became a hunter (from being a lifelong vegetarian), faced down her fears, learnt to be still and see things more slowly and deeply, and of course became adept at survival in the wild.

I figured it was worth documenting the learnings of someone who has so completely dropped out of human society and influence – and how this has affected their world view. I didn’t dog-ear many pages – it’s not a big book of philosophical musings – but here are some of the quotes from the ones I did.

The nature of fear

Lao-tzu: What you want to destroy you must first allow truly to flourish. So I took a deep breath and let the fear come. I was inviting the very ghost I was afraid of… Nothing happened at all. I lay in the silence and saw that it was, in fact, the unknown I was afraid of. Somehow this simple discovery made me feel unmeasurably better. … My fear was caused by my throughts. Is that always the case? I wondered.

…I had learned to look at fear and surrendered to my shadows on the wall. I wasn't afraid to look again and again.

We saw a chamois 20 metres behind us. I was mesmerised: I had never seen one up close before. … It was magnificently elegant, and it watched us with shy curiosity.

While looking at its eyes, I understood that beauty does not come through becoming, but only with being. The chamois was not working towards a better version of itself, it just lived. I, on the other hand, was always trying to become nicer, better, stronger, smarter and prettier, which caused me to lose my authentic self. I understood that the process of becoming disfigured my being. This chamois showed me, in that moment, that being is the most beautiful form of existence.

The future of many of these (indigenous) cultures was under threat. … ‘We’re in a bizarre position,’ Nick said. ‘In the West, we’ve ended up with a civilisation that is focused on progress and development, but is in fact an appalling make-believe on a gigantic scale. It encourages – almosts insists upon – distraction at any cost. In the public sphere we see violence, venality and greed. There is dishonesty, propaganda and obsession with the trivial… The list goes on and on. The system in which we live is a forced consensus of a self-created monster.’

What happens when you return to nature?

‘My sight and smell have become better and other intuitive senses I never knew existed have come back to life… I also feel more open. If I look at the person I was, say, 10 years ago, then I must say I feel more connected. Not only with nature, but also with other people. …What has happened to you in the last six years of living in nature?’ I asked him.

‘Compared to 10 years ago, I’m physically a lot stronger. It’s a great feeling to be fit and flexible enough to sleep on the ground and sit on rocks… In the world of academia, thought, concepts and ideas are quite overwhelming. It almost becomes more real than the natural world. But I don't think there is order to be found in an abstract world. Even though outwardly the wilderness looks chaotic, I think it is within the natural realm that we find true order.’

What is the most important thing in life?

‘Courage is more important. Humankind evolved and survived through courage, not through fear… What do you think is most important?’

‘Maybe clarity,’ I said after some time. ‘You need a clear mind in order to see what is important. You need clarity to know what you are going to be courageous about, and you need clarity to question reality.’

Miriam and Peter are currently walking across Europe to Turkey.