I've just discarded my initial 600 words on why it was such a challenge to get on a plane on my own and fly to Fuerteventura this winter. The less angsty, need-to-know summary is that I've been pretty conflicted about travelling in recent years. I was a frequent backpacker when I was younger, seeking out the cheapest huts, sleeping on one-inch mattresses, overlanding entire subcontinents for a fiver, etc, etc. I even turned my travel passion into something of a travel writing career.

But now I hate the flying, the research, the anxiety of going somewhere new and the suspicion that no one will talk to me if I do, being 50 and all that. Where did all this crippling angst come from? I don't think it is age; I think it is the lack of risk-taking once you settle down. (I never thought I'd settle down.)

And so it was quite the emotional challenge to book a week in Fuerteventura at the end of November – one I'd spent nine months procrastinating over.

In the end, I booked two days before flying (in case I changed my mind) and snagged the last dorm bed in the only available cheap accommodation left in Corralejo – a surf lodge on the deserted edge of town for about £14 a night. I tried not to think about who I'd be sharing with but the thought that the mixed dorm might be all-male did freak me out. It'll never happen I told myself.

At least I'd been to Fuerteventura before (for a birthday surf and bodyboard) so I didn't have to stress about going somewhere totally new. And my friend Kerry was flying out a few days later on her own trip so I would have someone to talk to for half the week.

Here are some snippets from my diary of what it was like, ending on the question: 'Would I do it again..?'

I'm in a surf house that sleeps 10 people at the edge of town where the signpost says you are now leaving Corralejo. It's actually pretty nice. It has a pool and a terrace and a large kitchen, albeit no space in the fridge.

I'm in a mixed dorm but in reality I'm sharing a stifling, slightly smelly room with three men: Jon, a surfer from the Basque Country; Alex, a 50-year-old Italian boat captain and kite surfer who looks a bit like George Clooney, and another guy who didn't come home last night but is now sleeping and snoring his way through the daytime.

I'm here for the chance to walk, swim, exercise and generally get outdoors in the sunshine. The first frost has landed back home. Here, the light here is beautiful; there's a soft warmth in the blue sky, even if the sea requires a brave plunge.

Over the past 10-15 years I realise I've been gradually upgrading my travel choices. I've paid ever higher amounts for comfort, privacy and location.

A dorm bed in a share house has brought me back down the earth. There was no door-to-door airport transfer, either: I had to walk down a dark, deserted street behind a walled-off hotel complex and use a torch to find SurfinTrip Academy and Camp house.

It's been a thrill already, even if it is the thrill of risk. I want to still love all this; me, a middle-aged woman with a rather large comfort zone. It's good that I did this by myself and see what it's like to drop out of my life for a few days.

It's Mum's 17th anniversary and I'm taking some time to remember her today. She would say 'Go for it!' – she always did.

I spend breakfast with the chainsmokers on the patio and the rest of the morning doing the chores of the self-catering budget backpacker: shopping at Hyperdinos and walking the long sweaty road home loaded down with heavy water and basic foodstuffs in the midday heat. Then I walk another hour to get to sunset, before realising I have my easts and wests mixed up and it's on the other side of the island. So. Much. Walking.

It's a pleasant evening at 'home', talking with a French Canadian surfergirl who's become addicted to surfing and is 18-months into a backpacking trip with no return ticket, and a 27-year-old bubbly lady from Leeds who's fresh off the plane. Later Captain Clooney points out Cassiopeia and other constellations in broken English like a scene from a John Cusack movie. I get no sense that he is going to make a move, though, thankfully; this is just a friendly 'let's look at the stars' thing because the clouds have cleared away and a starry night sky remains one of the best things ever.

These people are my temporary family, made up of random strangers from around the world who are not so different from me, or at least who I used to be.

Today a classic 'dirty old man' at the beach made eye contact with my unfocused, unspectacled eyes while I was drying off from a swim, and took it as an invitation to lurk. No, no. no. I thought I'd be too old for this particular joy of lone female travel. 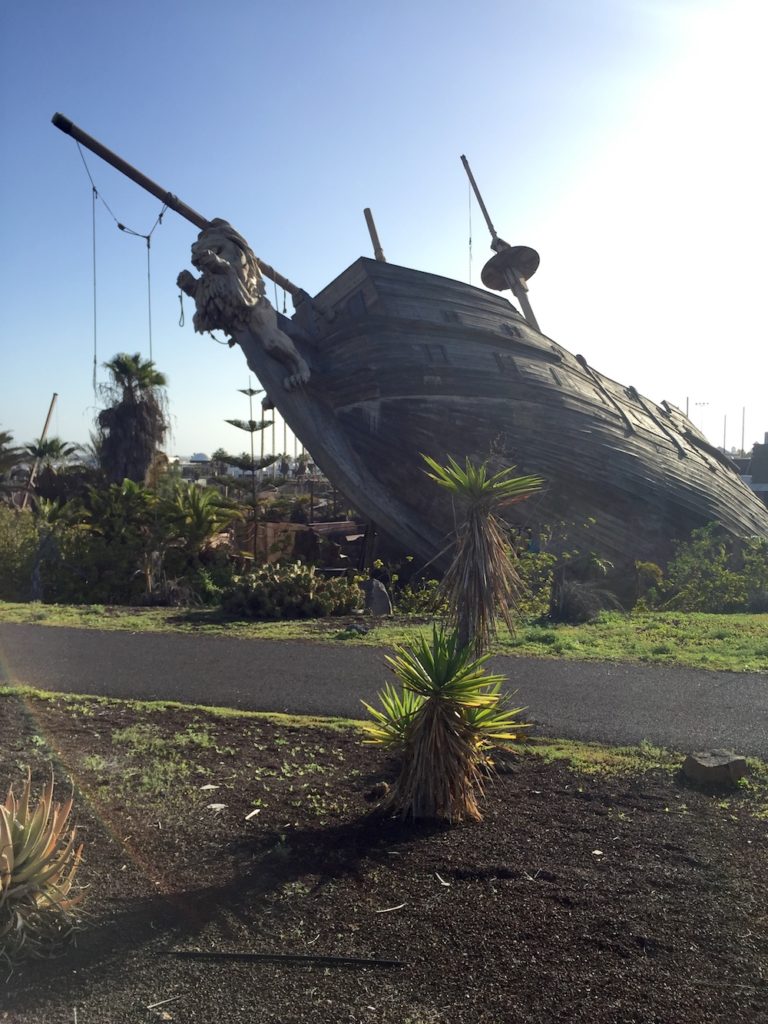 After dinner (Kerry has arrived!) we walk along the seafront for a nightcap tea and Tia Maria coffee at Waikiki Bar. I was dreading the long walk home and sure enough the busy road was now dark and deserted but for the occasional car.

I don't mind the dark or the emptiness, it's when there are potential opportunistic humans around that I get uptight. I pull out my Swiss army knife and thread the corkscrew through my fist. The massive closed Aqua Park is the worst, with its broken chainlink fences and large car parks and Scoobydoo-like giant galleon rearing out of the ground with lion leaping off it. I try not to picture being jumped and dragged in there to die in a deserted fairground.

'It's all about risk-reward' – this line from the young trainer at the UoB gym kept going through my brain. The risk in that walk back didn't seem worth the reward.

From this point on I moved to Kerry's accomm. Although this has ended on a bit of a downer, I had a fantastic week's break and I did get a lot from going back to budget backpacking if only for a few days.

It was fun, a bit uncomfortable but a good way to meet new likeminded people. I wasn't the oldest person there, to my surprise, and no one was ageist in the slightest. In fact, I found myself remembering how open and considerate and up-for-life the average backpacker is.

As for my travel fears, the public bus to the airport was also way faster and cooler than the rammed and rambling airport shuttle – and it was cheaper. I didn't take Valium on either plane journey for my fear of flying, and I was surprised at how little I fretted about these flights – an advantage of short-haul daytime flights and of booking last minute.

Would I do it again? I surely would.

Would I spend 11 months arguing with myself about booking it? Probably, but I'm working on it.

And look, I even look kind of happy.