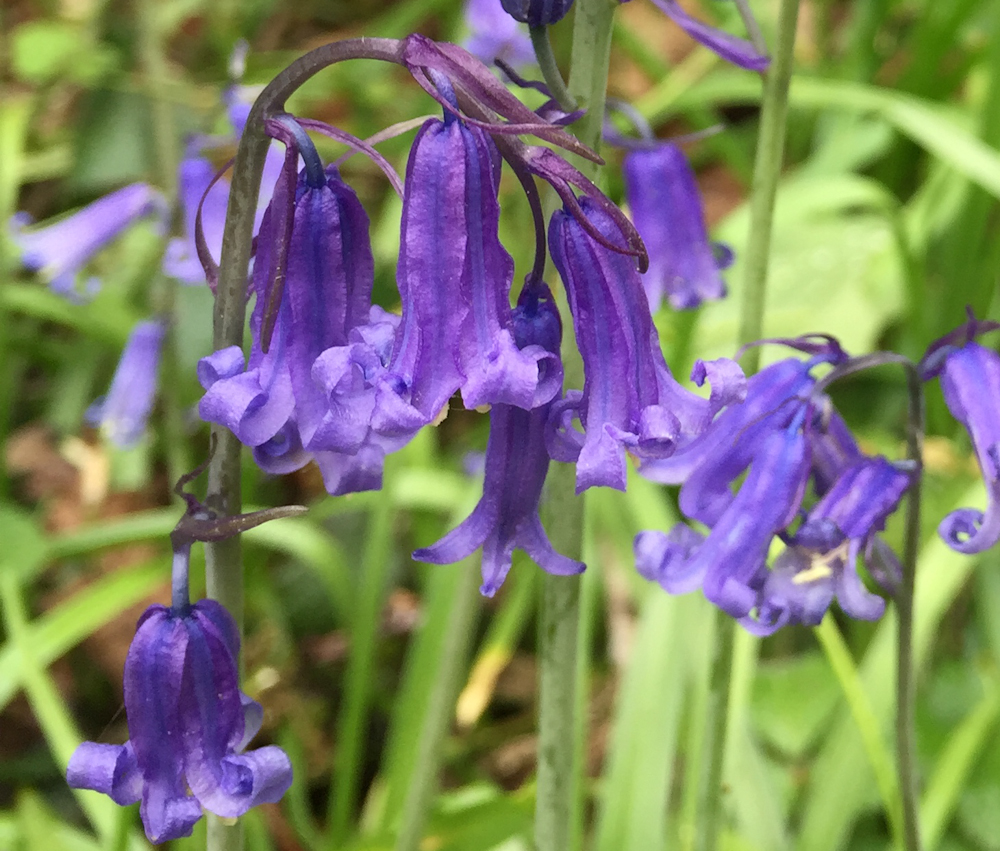 Just back from a five-mile guided walk around the Clent Hills to see large swathes of English bluebells – a darker, more delicate and aromatic flower than the invasive Spanish bluebell that has taken over my own back garden and which I pluck out, to no avail.

Adrian, our National Trust guide, told us that around half the world's bluebells are found in the UK – they grow well in our relatively cool spring climate, and are under threat from climate change. The warmth favours the Spanish bluebell, however: a wider leafed, sturdier, lighter plant, which is edging out the now protected native bluebell. Unfortunately, we found a small patch of Spanish bluebell on the trail, which is worrying. Hopefully Clent's volunteer conservationists can get right on it and root them out.

The three-hour guided walk was a test of stamina, down the hill from the National Trust's Nimmings Road café, up and over stiles, and into Uffmoor Wood for the first close-up view of a classic carpet of woodland bluebells.

We were instructed that bluebells can take years to recover well from footfall damage so we had to be careful where we walked and not trample them. It is also against the law to intentionally pick, uproot or destroy bluebells. Adrian told us some of the fairy lore around bluebells but perhaps that is more for the kids, or maybe a way to keep them off these delicate plants.

Sadly, two older ladies in the group had to turn back at this point as the stiles were difficult and the walk relatively pacey. Inclusion is hard but it was a wise move to turn back as I'm certain they really would have struggled on the terrain ahead if they'd continued. 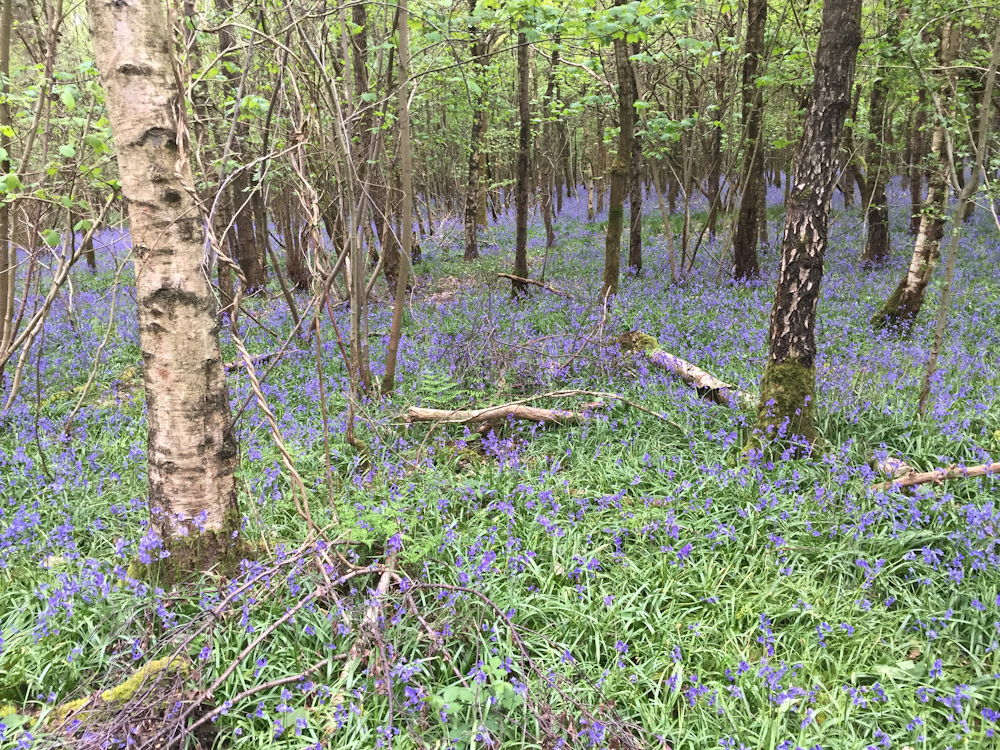 We emerged from the wood and turned back across Penorchard Meadows Nature Reserve where three horses were at pasture in one of the largest remaining areas of semi-natural grassland in Worcestershire. The white horse (auspicious for success and good luck allegedly) came over for a nuzzle. It was a lovely English pastoral scene. A little further on, wild garlic was growing down by the stream, fragrant and in full flower. 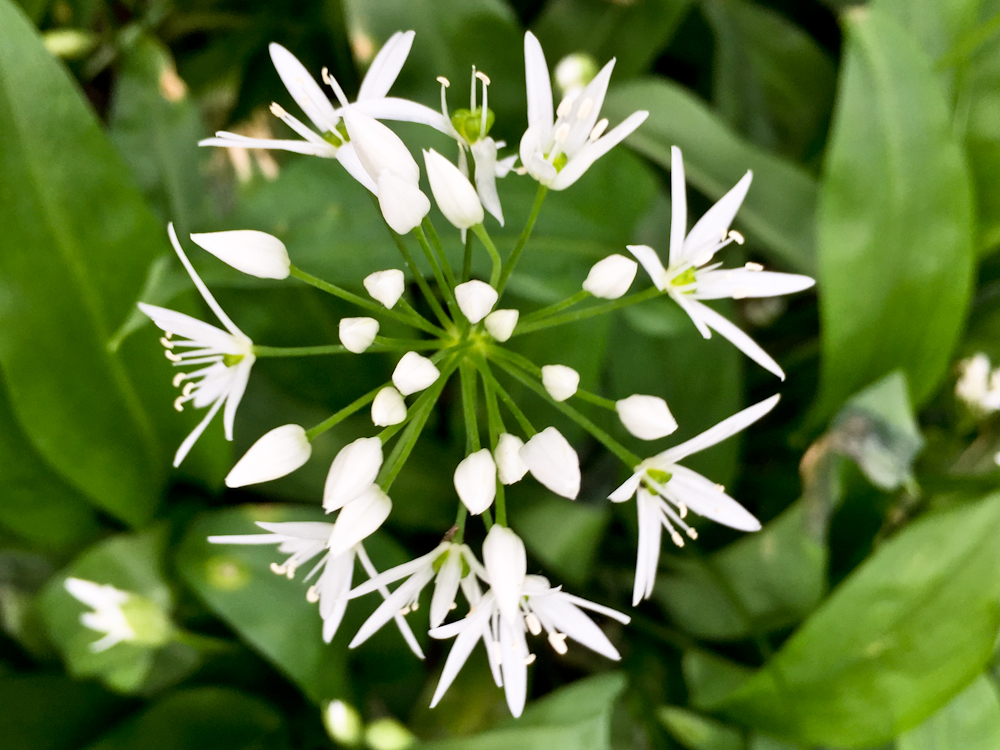 I learnt only recently that you can cook wild garlic – apparently it's particularly nice in a mushroom risotto and more mellow flavoured than traditional garlic. Both the leaves and flowers are edible but you have to be careful not to confuse it with poisonous Lily of the Valley, which is resembles before it flowers. Walk leader Adrian also suggested some recipes such as including it in a wild garlic pesto.

Next we came to the spring and church of St Kenelm, who was martyred on the site in the year 820. Said to be a place of healing, people had tied bits of cloth with name dedications to a sacred tree (well, a hawthorn but needs must) in the hope of a blessing. I haven't seen this done since finding one of the slopes of Glastonbury Tor in 1999. It feels like something that probably harks back hundreds or even thousands of years. 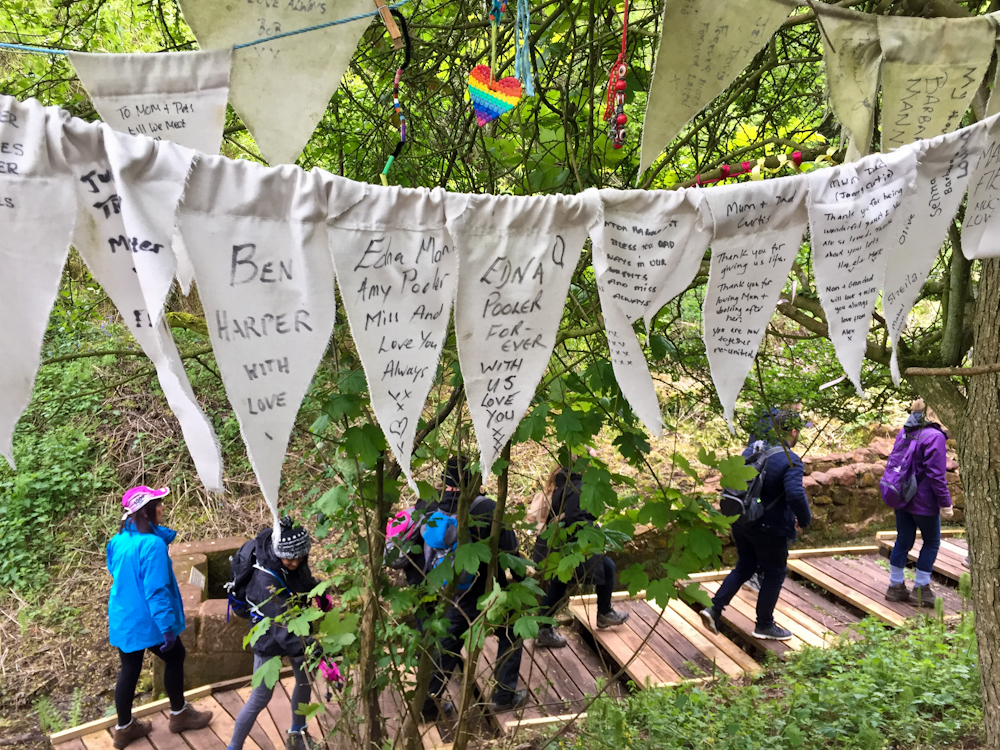 The long walk back up Walton Hill saw off a few more walkers suffering sore knees and tiredness; there was a shorter option back to base from there. The views to Birmingham and Brierley Hill were misty and grey but the sun was finally about to come out.

There are bluebells in many areas across the Clent Hills, but the best was yet to come. As the path steepened into a climb up into the woodland on Walton Hill, I don't think I've ever taken such good shots of bluebell woods. 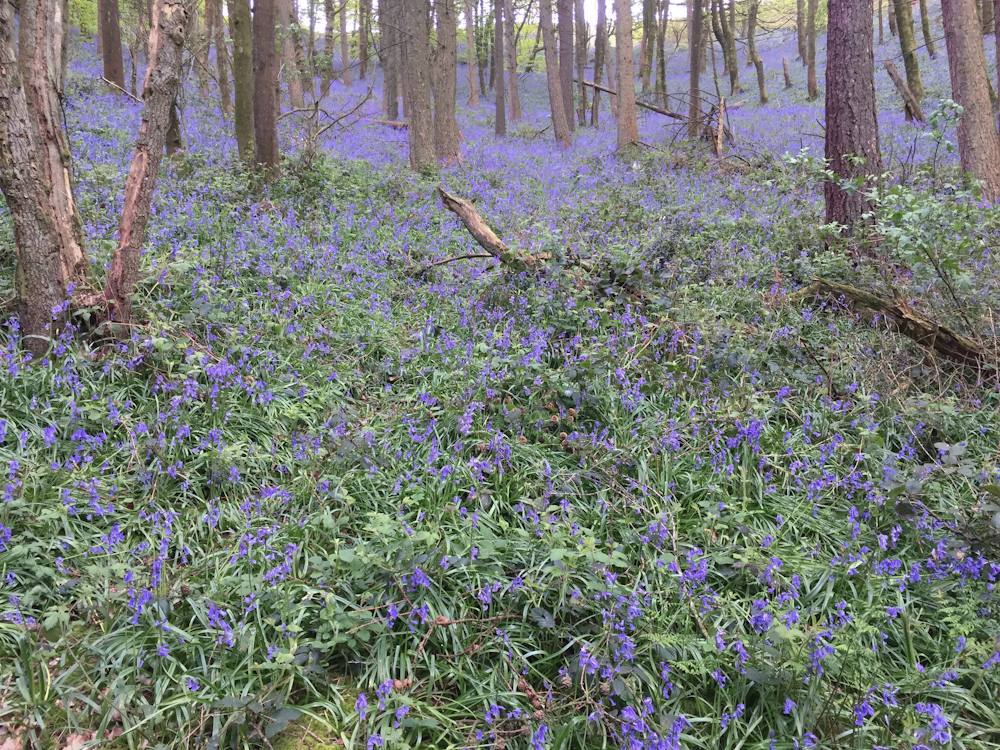 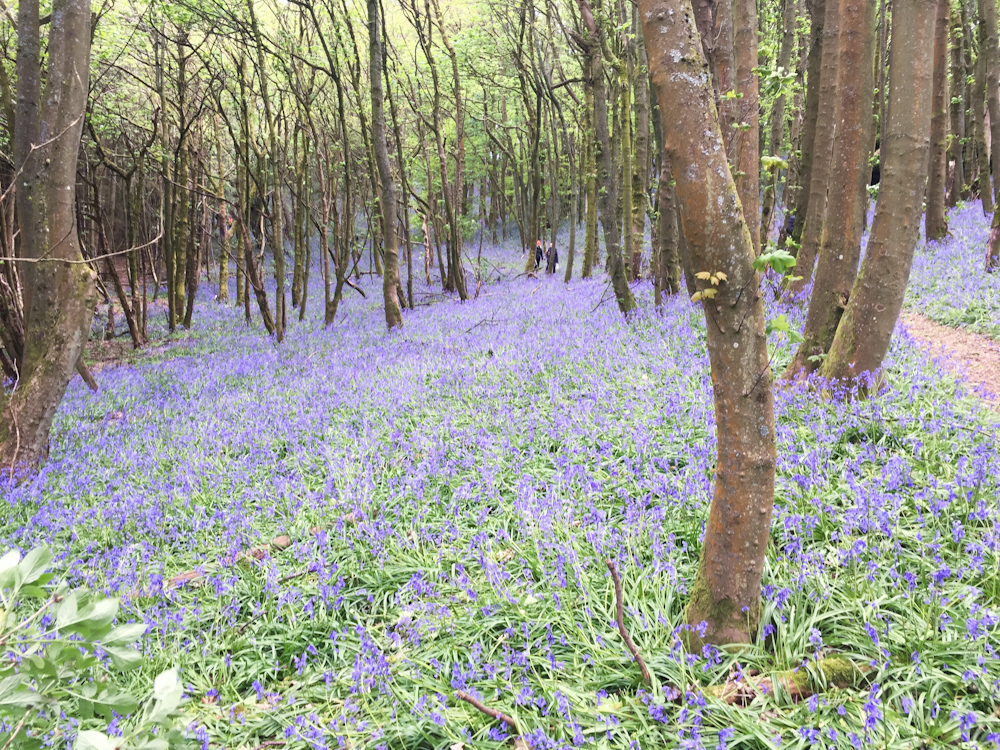 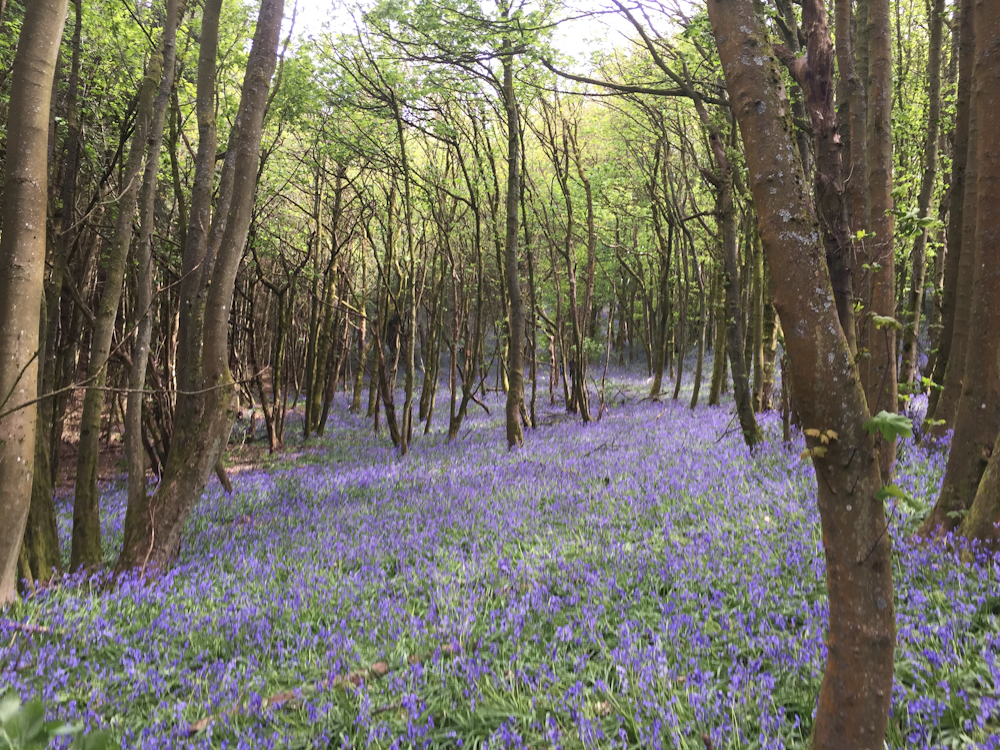 I'll also remember this section for one lady picking up discarded plastic bags containing dog poo. I remember so many 'pick up your litter' campaigns when I was growing up, maybe it's time for another national campaign to remind people? Even using a stick to flick the mess off the walking path would be better than leaving non-biodegradable plastic all along the trail.

This same lady was a long distance walker who had walked the whole 630 miles of the South West Coastal Path. She and another litter-picking chap gave me lots of advice about my own plans to do walk there later this year: build in breaks, alternate long and short walks, check the last bus times back, etc. The sociable aspect of these walks is a draw for many. 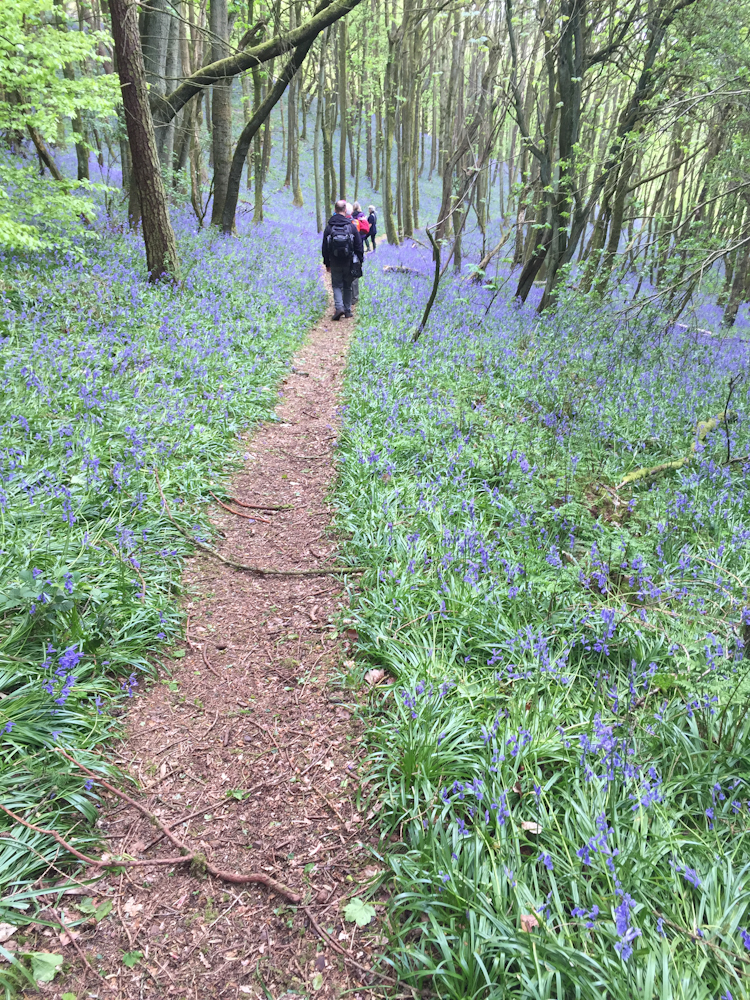 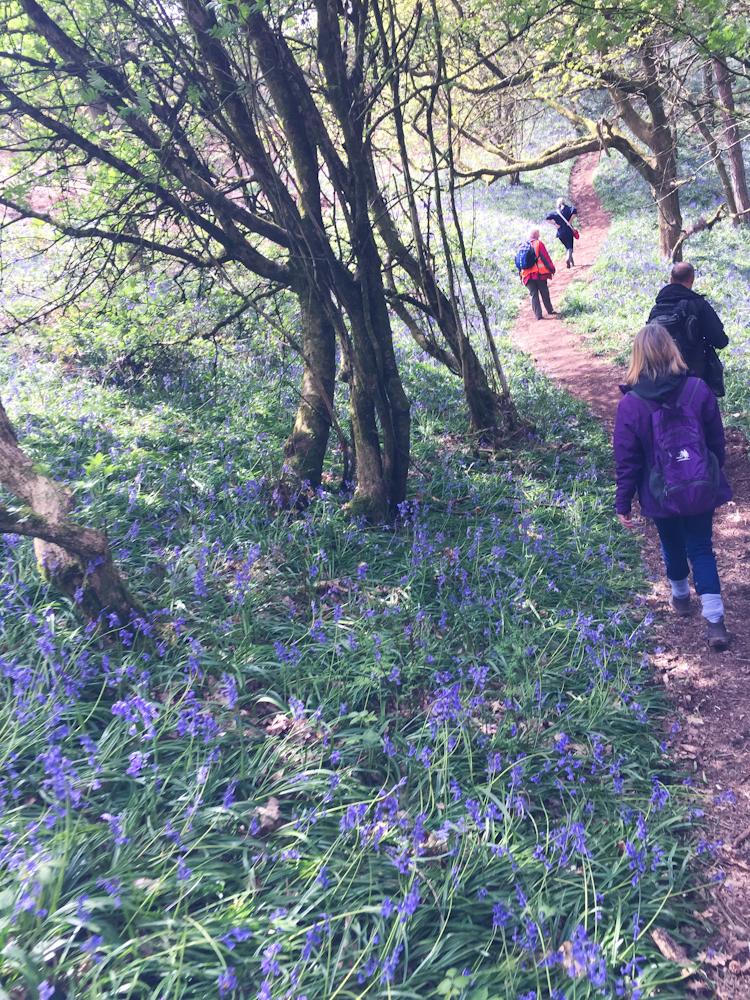 By the end, I had slowed to be the last walker in the line, the final push up the hill turning my legs to jelly.

Clent did have a final surprise in store, though: the unusual sight of bluebells growing out in the open. Usually they grow in cool shade but I think these patches of open hillside behind the Four Stones atop Clent had just had bracken removed. Bluebell colonies take five to seven years from seed to flower so this purple carpet may not survive in future – but they are here now, and look stunning. 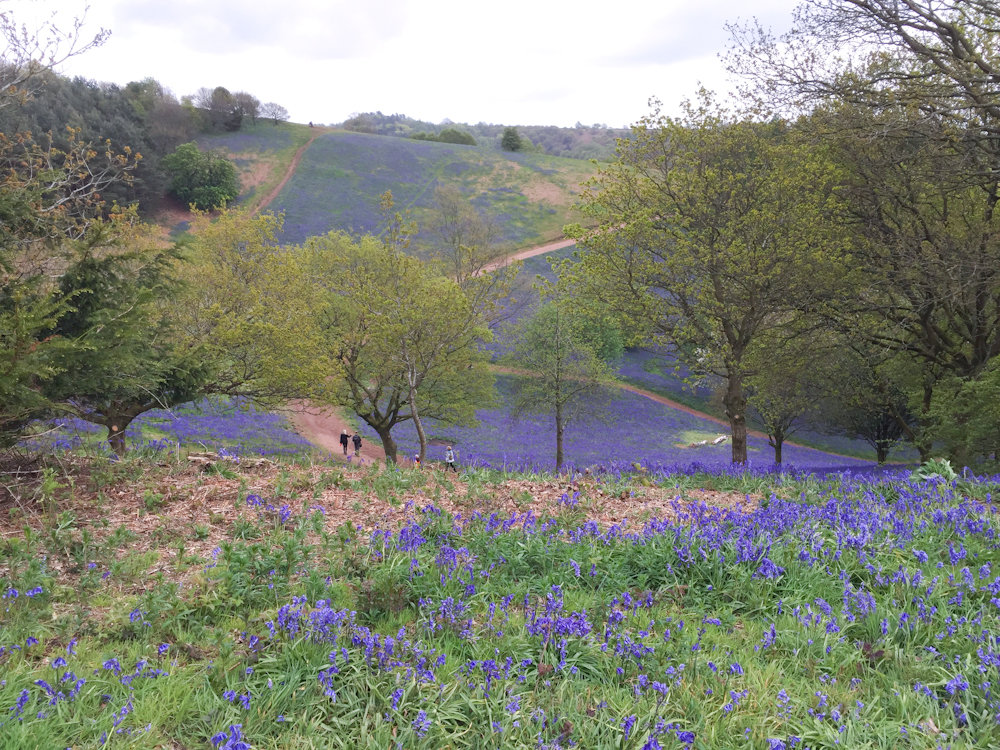 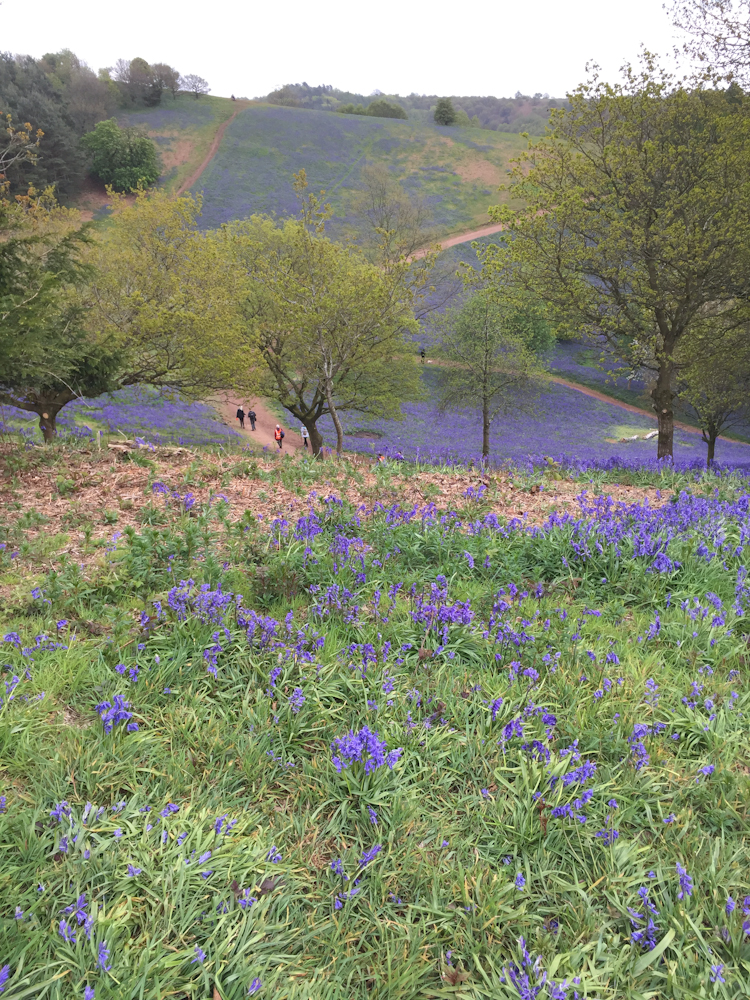 This was a lovely (if occasionally testing) walk with great views of the great English bluebell – also poetically known as Cuckoo’s Boots, Wood Hyacinth, Lady’s Nightcap and Witches’ Thimbles – and we enjoyed informative guiding at the bargain price of just £2.50.

Recently I've enrolled as a volunteer at Clent Hills to learn bushcraft skills and help at corporate team days (more on that in a future post), so it was good to be back on the hills.

The bluebells should be there for another week or two, maybe til mid-May, so get up there for some purple haze before everything fades to green once more.

There are two more guided bluebell walks at Clent on Saturday 4th and Wednesday 8th May (info/booking here). Bluebell info/National Trust: 6 things you might not know about bluebells