I never thought I would see the day that I put on a brocaded wedding gown (with train, tiara and veil) but somehow it finally happened last weekend. Here I am… This is why I've been absent from my blog (and social life) for so long. There are few things in life that involve such commitment. Two whole months of preparation every Tuesday evening, every Saturday afternoon, then every Sunday too, and finally every day leading up to the big day, or rather weekend. But at least I wasn't alone. 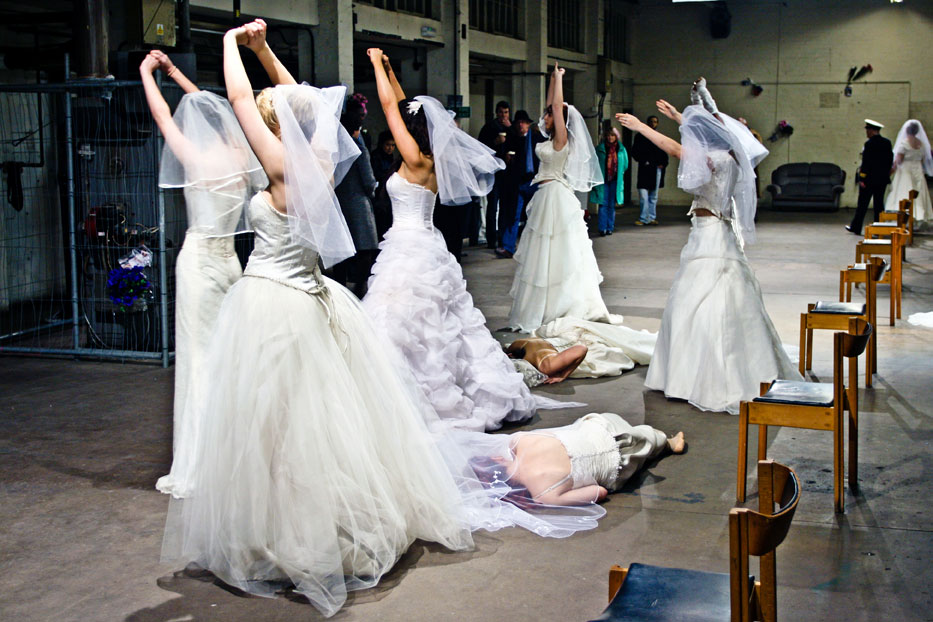 It all started a year ago when I fell in love with Birmingham Opera Company after joining the cast of Othello, their nationally lauded contemporary version of Verdi's Otello, set in a warehouse in Digbeth, carpeted like a mosque and featuring a community chorus of volunteer amateur singers. When they started rehearsals in September 2010 for Stravinsky's Les Noces – aka the Wedding – I was there like a shot for another season of 'tra la la'… 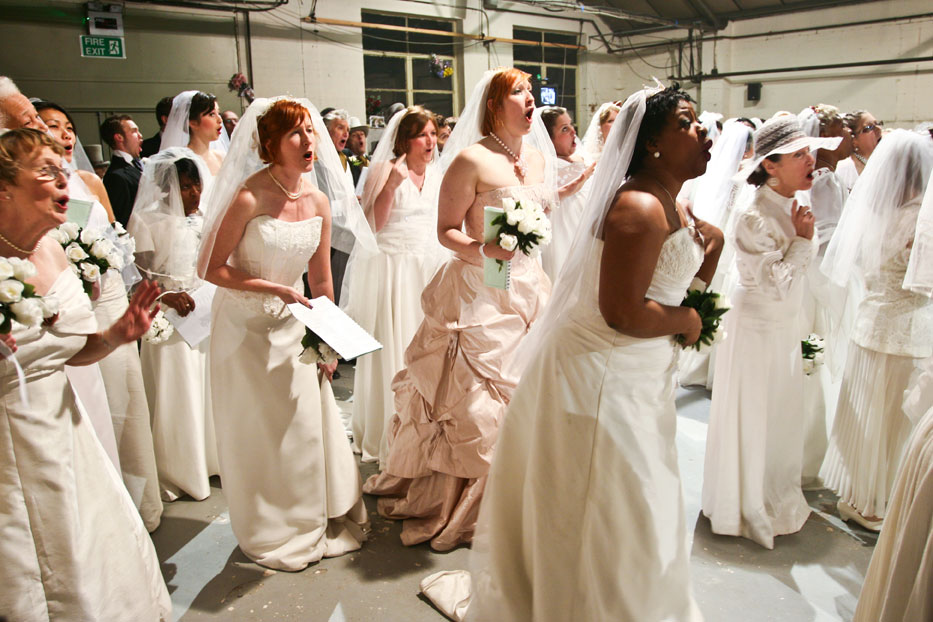 Stravinsky's ballet was a far more difficult piece to learn, though, despite two months of rehearsing and note-bashing with choirmaster Jon Laird and despite having a CD with our parts sung for us.

As the publicity reads: "The Wedding is a screaming, shrieking, flat out masterpiece with its rhythmic drive and unique sound world- 4 virtuoso pianists on grand pianos, a dazzling array of percussion, 4 soloists and a chorus. Written as a ballet in 1923 for Diaghilev's Ballet Russes, Stravinsky drew on Russian traditions to conjure up a vivid and intense depiction of the old ways, and the not so old!"

I suspect most of the chorus found the musical soundscape of Les Noces quite anarchic with every part seemingly at odds or out of sync with each other. But since Birmingham Opera's director Graham Vick had said that he wanted space to play and experiment (more so than usual), it seemed the perfect piece. Here are the tenors and basses, by the way, instructed by Graham to act like baboons behind a cage sign saying "Please do not feed the grooms"… 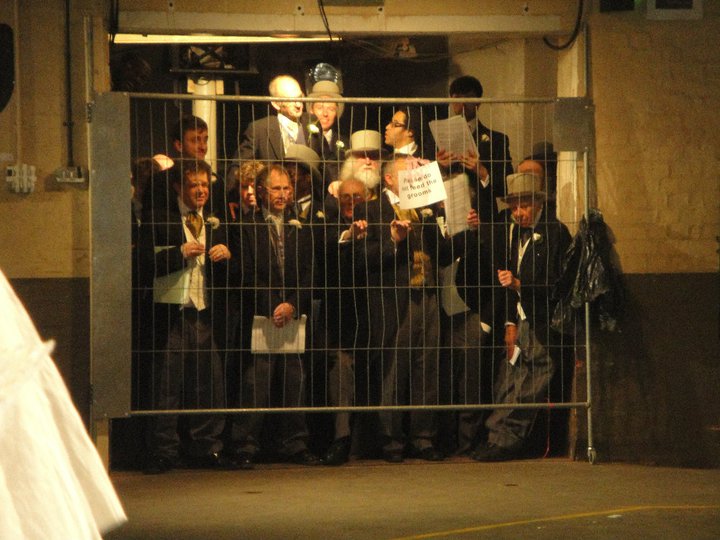 The setting was the AE Harris factory in Birmingham's Jewellery Quarter – home of Stan's Cafe theatre company. 'Just Married' was daubed in giant red letters across one wall, the paint dripping like blood. Bouquets and wedding photography were poked into factory fittings. The grooms were in their cage, the brides prepping in one of the four main performance spaces (it's a walkabout opera). In the centre were the percussion instruments and four grand pianos. Meanwhile, Frankincense filled the air scenting it like a church. 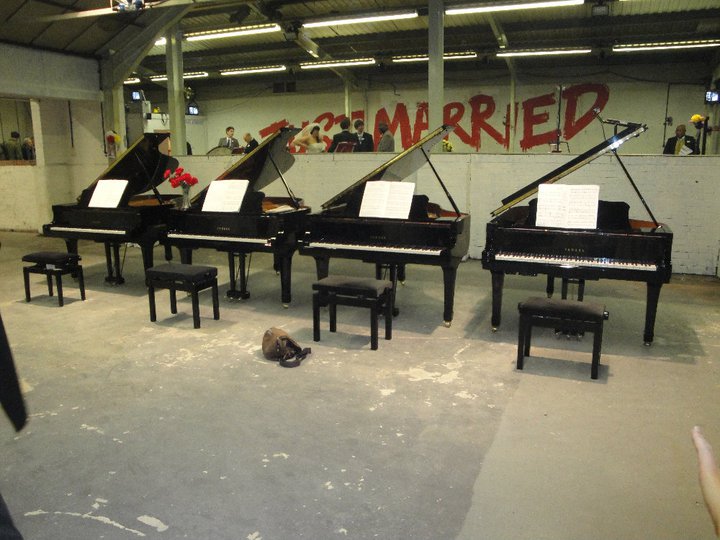 The performances went off differently each time – some electric, some a bit lacklustre, some more musically correct, some all over the shop. As Jon Laird, conductor and choirmaster, said: "We're riding the wave of uncertainty – again." It's the nature of working with enthusiastic amateurs I expect, and part of the challenge to all those involved.

(Jon also said a few other things during note-bashing – his entertaining approach to learning is one of the main reasons the amateurs show up again and again despite all the hard work. His encouragements veer between backhanded compliments, screeching impressions of the sopranos, perfect analogies and random metaphors: "It's hell – and then it suddenly makes sense"; "Good. Good and terrible"; "You're flailing around in a sea of pain"; "Can we have less wicked witch of the west and more heavenly angels please ladies"; "This is a beautiful tapestry of joyous Russian STUFF"; and so on.)

Here are the sopranos being obedient while trying to read the repetitively rhythmic words and also watch Jon for cues. 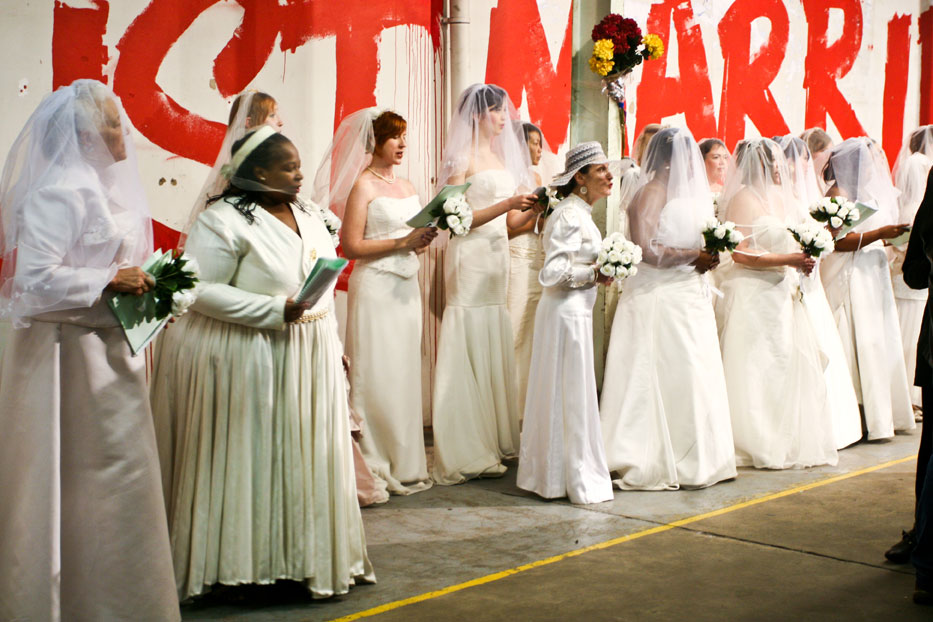 Apart from feeling like you're in a real-life version of Faking It, joining the Birmingham Opera Company is a real social event for the participants. The Wedding had 120 in the company; Othello more than double that. Here are my fellow brides and I milling about ahead of the opening scene. The after-parties are pretty great too… it's where the temporary bar gets drunk dry. I did keep a diary during the making of Othello until it got too busy and manic. I must get around to posting that here or somewhere because I really would encourage anyone who enjoys singing to get involved (next production is in spring 2012). It's a long time to wait though. And at the moment I am full of post-performance MEH! So until then I may as well wallow in these photos of my big fat fake mass wedding and my lovely Sop 1 bridezillas, such as Annabel and Judith pictured here, who got the best dresses by far. Sadly for us the honeymoon is now over. 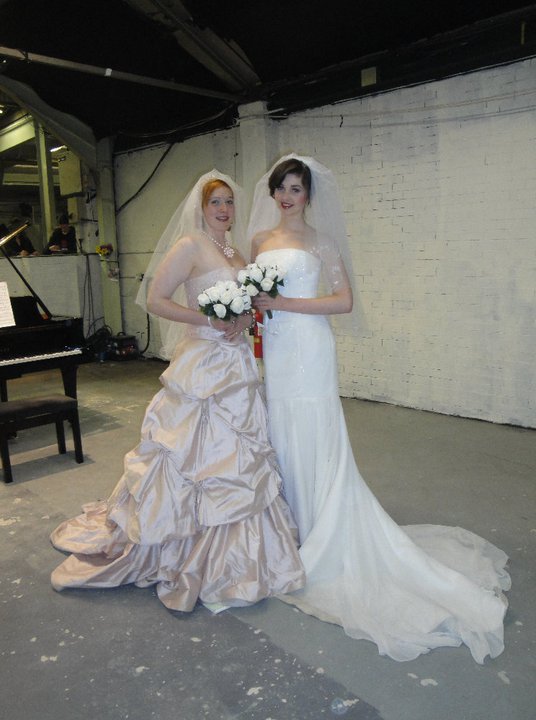