* …that Austin looks awesome from the 33rd floor 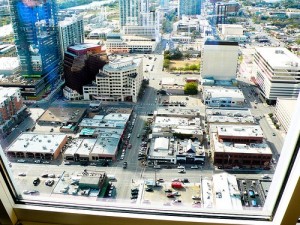 Fringe events outside of the main SXSW programme are occurring all the time. I just found out today for example that there were THREE Twitter parties (not just the official one). But you can often only come across these serendipitously through the people you meet at South-by. One off-programme invite I got was courtesy of Stephanie Frost, a rather lovely marketing lady from Atlanta and co-author of a new book called Marketing Unmasked. Being from Atlanta, she had access to SExSW (which spells Sex SW, I know), a party put on for those hailing from the south-eastern states. Stephanie’s invite took me to the Frost Bank Tower, the second highest building in Austin, for some rather pretty views, chats and a glass of the good stuff up in the 33rd floor penthouse suite.

* …the ABC of douchey panels
Sometimes you just get a panel that doesn’t live up to its blurb. Irritating if you picked that one out of three others that you also wanted to see. It happens; there are hundreds of panels at SXSW. Here are your options:
A. Revel in the backchannel snarking.
B. Leave in search of an alternative or take a sunshine break.
C. Use the time to catch up on your Twitter, emails, feeds, SXSW blog, uploading your SXSW pictures and video, filling in job applications, etc.

* …about the digital agency workflow
Well, one agency’s workflow in particular. I kind of felt sorry for Archetype, the Interactive Agency Workflow panel guys. They had a packed room but killed it by using themselves as the only example. Result? The room emptied by degrees. They also got a slating on the Twitter backchannel. However, being a web writer/editor, I’m often at the end of the digital agency production line and don’t get to see the overall process so this was quite interesting to me. It was good to see the wireframes, hear how not to burn out your staff and some ways of dealing with the post-delivery jubilance that is then crushed by the client hating it.

* …that being called a bitch is good news
I don’t >think< I’ve been called a bitch, but according to @Cinnachick on the #sxswbitch panel, I’m missing out, because this situation is full of WIN. ‘When they call you a bitch, it means you’ve won. Why? Because they aren’t smart enough to continue the conversation,’ she says. Fair point. She loaded this up with a whole list of projects set up by women who haven taken on the establishment in some way to create their projects. Here’s the blog post/slides.

* …that heartbreak and wonderful things often occur simultaneously
The Fray Café is a SXSW regular. It’s an event where people stand up on stage and tell stories, ­with only one proviso: IT MUST BE TRUE. Having had a couple of crap years here and there myself, several stories really resonated. One in particular from Baratunde Thurston, Web & Politics editor at The Onion, was both amusing and tragic at the same time. The audience was sworn to secrecy due to the personal nature of the story, but I was reminded of 1996 – the year I lost my Dad, uncle and grandmother, but also found one of my favourite friends and went off to explore the world. HsAPaPdY.

* …that the average blog is read by 6 people
That stat from Danah Boyd’s keynote. So think about that the next time you feel pressure or guilt to produce a blog post for your audience but should really do other, more important things instead.

* …to JFDI!
Am I a video blogger? No. But Social Wayne impressed on me to ‘JUST DO IT’ in his Becoming a Real-Time Video Blogger in 2010 talk and, you know what, I think I will. After all, YouTube is the No2 search engine, the 4th most visited website, has over 20 hours of video uploaded every minute and is watched for 8.3 hours every month by the average viewer. I also remember randomly overhearing in the corridors: ‘There are just too many words, man!’ So, my takeaway: more video. (And here I am in real-time trying to video blog after 22 hours no sleep on the train to Austin…)

*…two new words
Propinquity is the coincidence of being near – in ‘physical proximity, a kinship between people, or via a similarity in nature between things’. This was brought up by Peter Kim in the Social Business Design panel. Propinquity is what business has to fight/extend/engage with in order to get people to venture beyond their near friends/family. Twelpforce was an example quoted as helping creating this engagement and getting close to consumers by offering a Twitter help squad to answer questions beyond the local store experience. Slacktivist was another word from the Little NGO That Could panel but for some reason this type of portmanteau word reminds me too much of chillaxin’. Bleugh.

* …that content strategists are like Wall•E
We go around cleaning up the Armageddon-like mess of crap that has been thrown up on the Web often without a thought by brands, marketers and others. And when we find something beautiful amongst the endless crap we get all excited and want to store it and share it. The Wall•E analogy was used by Kristina Halvorson to bookend her Content Strategy FTW talk.

* …that journalism is getting interesting again
The panel on combining news with context (how revolutionary!), or context with attached news, had some great speakers. What seems clear is that big organisations ar failing to do this well because they are constrained by their traditional roles – which leaves opportunities for the agile. The other interesting thing was The Newspaper Club – a 4IP-funded tool called ARTHR for producing your own newspaper on those ‘magnificent bits of infrastructure that are just lying around’ – printing presses . I heard more than one classic Austin ‘awesome’ when people circulated the ‘limited edition’ newspaper the group had printed at 7am that morning on the Austin Statesman presses. As the endline of the presentation went: ‘We have broken your business, now we want your machines.’ How funny that the internet is accelerating content in the form of old-school newspapers, and how great that these newspapers are made by the readers themselves using traditional publishing infrastructure.

* …that we are networking as Rome burns
Sci-fi author Bruce Sterling traditionally does the final remarks of SXSW and this year his dour look into the future added a fat dollop of real-world context to all us little digitalists running from panel to panel, searching for answers to today’s business conundrums. But in essence we must face the digital demonetisation of our new world – many business models are broken and the numbers involved in their replacements are not large enough to sustain us. Oh and we will be hated by future generations for what we are building or throwing away now – just to warn you.

Tomorrow: the practical gains of attending SXSW this year. [UPDATE: now blogged at Five things I gained at SXSW 2010].