The ‘cool, shiny new thing’ that sent marketers crazy in 2009 was Twitter. (This year, it’s mobile apps by the way.) Why? Because although Twitter launched in 2006, it exploded into the mainstream in late 2008/early 2009. And brands were champing to get a piece of that action.

Having just spent three days at Search Engine Strategies London, Twitter is still clocking up a lot of mentions from SEOs and businesses, etc, who worry about how best to involve with it. Well, you'll see a rise in this engagement, especially now that it is being crawled by Google for real-time search results and because marketers are realising the value of a recommendation on Twitter.

So rather than regurgitate whole speeches, here’s what SEOs and marketing types from SES London are saying about Twitter for 2010 – at least in the sessions I attended:

1 Real-time search: be wary of the value of Twitter
230 million pieces of content are published per day by user. 40% of searches have a real-time component. Potential $40 billion market. But:

Who is my audience? Are they on Twitter, if not don’t spend (time) there.

Twitter is not accelerating as fast now, it has peaked on the growth rates. The vast majority have less than 5 users.

Social network profiles (including Google Profile) drive traffic. Active Twitter users, Dell, also reported in excess of $3m in sales in 2009. Its Twitter is essentially just a promo shop, eg, 15% off at any Dell Outlet – which leads to direct click-thu sales.

6 What are the biggest problems for marketers using Twitter?

Analytics, KPIs, how does it impact the bottom line. Also, getting followers in the market you are going after.

Mike Lewis, Business Tweeting: I think Twitter is working, but I can't prove it!

Fact – individuals are adopting Twitter, but what about brands? Great thing about Twitter is that brands can connect one to one. But there is a trend of moving towards automation.

When analysing your online stats, compare traffic from different sources. Eg, from blogs, it usually has high context, expectancy is there, users know what they want to see, and spend more time on site. Twitter – may generate high traffic but can also have a high bounce because it lacks space to create context.

Rand Fishkin, CEO & Co-Founder of SEOmoz.org, hit the nail on the head for me when he said: 'Find a social champion!'

Speaking on Social Media Best Practices for Marketers Inside the Brand at Search Engines Strategies London marketing day on Monday, he said, ‘You need someone in the weeds, someone who gets it in the same way as the kids do who spend 5% of their lives on Facebook.’

This was is his favourite stat by the way: If you’re under 25 and live in US, 5% of all the time you spend alive is spent on Facebook.

Rand admitted it was illegal to hire by age, but also shrugged – by implication those deep in the weeds of internet culture will be recruited. [UPDATE: see comments for his further take on this.]

Which slightly annoys me, being deeper in the weeds than all my teen nieces put together and not half as deep in as many friends in their 30s and 40s.

Yet it is also true that it can be totally time-sucking for commercial digital or social media hirers to feedback to those who ‘don’t get it’. This goes back to an earlier post on my sub-editors' blog called Journalist, train thyself! Online needs you… desperately! [Out of interest, training budget seemed to be on the up at the Search Engine Strategies conference, for some anyway.]

And when looking to hire or commission someone as an SEO writer, a breadth of online presence is definitely desirable (as well as on-the-job experience and SEO training).

Having a blog or a Twitter account or a Tumblr or a Posterous (ie not just a Facebook profile) is not just an indicator of ability and engagement, but shows a basic understanding of internet culture and who they will be writing for. After all, you can't kid the kids.

The next question of course is how do you hunt out these social champions within your organisation?

It's something I'm processing in my freelance blogging work right now. 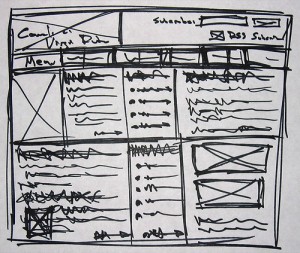 If you’ve ever had the job of putting your marketing email, ezine or e-newsletter together – whether designing the format, writing the blurbs, testing different subject lines or segments, sending it out to subscribers, dealing with unsubscribes – 7 Proven Tactics to Increase Response for your Email Campaigns seemed the session to attend at Search Engine Strategies 2010 London.

Having spent much of last year producing a monthly email across nine segments for a major car insurance and breakdown company, I was interested to hear latest best practice and get some inspirattion. After all, we tracked KPIs, tweaked designs, improved clarity on calls to action buttons, yadda yadda blah blah, and saw a leap in click-throughs. But what else could we have done?

Tamara Gielen, Independent Email Marketing Consultant, who ran email programmes for eBay among others, had some ideas. She promised seven tactics in the presentation but instead, I counted 30. So there’s lots to know, too much to reproduce here.

There’s a lot of talk at Search Engine Strategies 2010 London about ‘doing it right’. SES London is a three-day conference and expo that brings together the superstars of SEO and SEM to reveal the latest ways they are dancing with the search engines, each side locked in a teeth-gritting tango and dancing each other across the floor in order to win the eyeballs and clicks of users, and present user targeted (marketed?) search results.

At least that’s how I understand it. You got love a metaphor.

But ‘doing it right’ –monitoring analytics, refining strategy, making informed decisions about whether to spend on SEO work (to boost presence in organic search results) or PPC (paid for results) – well, that takes resource and budget, aka time and money. There may be a lot of explaining here, by the way, as I get to grips with marketing buzzwords and attempt to translate it into words and concepts I understand, being from a journalistic background and thinking of B2B verticals as something smutty.

The 'number one bitchfest’, as keynote speaker Avinash Kaushik put it today is : ‘I can’t get my company to pay for an analyst.’

And why don’t we get the love from our execs? Because they just don’t get it. It’s a rare CFO or purse-string holder that gets internet culture and what they should pay and where.

Without this, you don’t have an SEO strategy or, if the consultants at SES London are to be believed, a hope in hell of getting your brand/product seen.

So how do SEO's thought leaders suggest you deal with this?

Here are two lovely anecdotes from their SES speeches:

And he said: ‘Gotcha! You didn’t say laptop, etc, – but you thought about it!’

Lesson: Tech is ubiquitous. Email is ubiquitous. Social networks are ubiquitous. Being disconnected is, for some, like having a left hand cut off. So try this question on your friends, colleagues, even the CFO – and convince your business people through their hesitation how important and embedded online has become.

‘I can only blog at midnight. I have a job, I have two small kids so this is the only time I can blog. But my wife she loves me; she says, “Go to bed!”

‘Why? Because it is irrelevant to her. It is the same with executives.

‘The third time I quantified the goals of his blog (number of feed subscribers, conversion to speaking engagements, my about page which has tracking codes on all the links). I say, “Honey, you should let me blog because last month, I made $26,000 fake dollars!”

‘And she says, “Work harder”, because finally that number means something to her.’

Lesson: to transform your site, blog, etc, you need to compute the economic value to the financial people in your company. Talk to them in language that they understand.

Somehow I've lined up a conference a month for the next three months. Here are their taglines, blurbs and what I'm aiming to do at each one:

Me: Blogging (right here) points of interests – particularly interested in conversion rate optimisation stuff for websites and emails (esp after being RAC ezine's online editor last year), information architecture, business tweeting and happy hour cocktails. So I'll try to throw up (!) some posts on these from the event.

Blurb: Five days of compelling presentations from the brightest minds in emerging technology, scores of exciting networking events hosted by industry leaders and an unbeatable line up of special programs showcasing the best new websites, video games and startup ideas the community has to offer. Join us March 2010 for the panels, the parties, the 13th Annual Web Awards, the ScreenBurn at SXSW Arcade, the Film and Interactive Trade Show and Exhibition, Microsoft BizSpark Accelerator at SXSW and, of course, the inspirational experience that only SXSW can deliver.

Me: There for the margaritas, parties and crazy games naturally, but also to meet interesting contacts, learn best practice on content-related stuff and bring the skills back home. Also looking at finding some connections doing interesting stuff in the hotel/conference/travel line of work maybe. And generally promoting the digital side of the West Midlands region, which is part funding me to go on their digital mission. Should also be blogging a bit from the event as per last year. And hoping to hook up with the Tuttle 2 Texas crew somewhere around New Orleans for the last leg of their trip – more about what that's about on the Tuttle2Texas Posterous. Oh and finally hoping to work out what distributed storytelling is all about from last year's Microsoft BizSpark Accelerator MC and tech journo prof, Brad King.

Blurb: Where business analysis meets user experience and content development – two exciting days of workshops, presentations and discussions led by leading experts and practitioners from the emerging field of Content Strategy. Whether you are already a content strategist, or looking to break into the field, this exceptional event will put you in touch with inspiring people and new ideas.

Me: Content strategy is what I'm most interested in right now and this is the only major conference featuring all the big names that doesn't involve flying to the US. Looking to pick up skills in this area as I've just started working with the wonderful WTF! Fierce Festival to help get their content strategy ducks in a row in 2010. Also hope to finally meet Kristina Halvorson, content strategy queen. And will also be bringing an artist along to document Paris in an experiment of travel journalism for Tourist Vs Traveller – more of that in a future post.

That's me sorted for the year, I think. Unless anyone knows of any interesting travel journalist conferences…