In early September I took part in GILF Island, a weekend-long live art workshop about female gender and ageing, invisibility and desire/desirability, run by two Live Art Development Agency artists called Vortessa. Riffing off the TV show, Love Island, we were there to challenge the idea that desire and sex is the preserve of the young.

The workshop blurb put it this way:

As women who age we are marginalised, our sexual currency is removed and we are left to mourn our younger desirable bodies. GILF (Grandmother I’d Like to F*ck) Island is a safe haven to explore and join us on a process opening up an important dialogue about the socio-cultural blocking that arises when negotiating the territory of the ageing body, accepting that we are still sexual creatures, with desire and passion.

We brought our role models, our theme music, costumes and treasures as provocations. We lounged on giant inflatable pink flamingoes underneath plastic palm trees and discussed the things that were important to us. We looked at daily rituals we can’t do without. Mine was so ingrained and invisible that it took me the whole first day to work out that my most common ritual, other than teeth-brushing, is to write.

Not just write but photograph, video, or otherwise record and report as the tools allow. I’ve always processed the world through writing – from diaries to a career in journalism to social media.

How could I use this writing habit to address GILF Island themes? I wanted to somehow address the common feeling women over 50 have of becoming invisible in society.

A quick aside on invisibility in middle age

In the post-punk generation I’m not sure 50+ women will be as forgotten or invisible as they have been in the past. But it is there in TV choices such as Love Island, the age-related cloak of invisibility that older women may endure in a number of ways.

You may no longer be seen as (re)productive by society or feel needed or useful once the kids have grown up. Tied in with this is the experience of losing our sexual currency; of being passed over for younger, more attractive prospects; of male and media gaze valuing youth and perfection over wisdom and experience. Older women may be overlooked for work promotions or rejected for jobs on the first pass, even though age discrimination is not legal. And now there is digital invisibility… of data bias when women are not included in data sets or considered in design processes. Or, in my own case, having my passport photo rejected because the machine couldn’t find the outline of my head thanks to ageing white hair set against the white background of a supermarket photo booth.

Writing as a ritual, gender as a target

But back to writing… I realised that if I died tomorrow, there would be a lifetime of diaries to prove my existence. I write therefore I am. From writing, comes existence and visibility, perhaps even immortality.

What is written and recorded becomes a tangible document. The writer also becomes visible through authorship.

These were the thoughts running through my head as I panicked about what I would actually perform the next day. Let’s face it, performance, public speaking or anything where you stick your neck out is both stressful and a risk. Particularly for women who receive ridiculous levels of vitriol, death and rape threats, just for standing up in the public eye.

It’s fair to say I was nervous.

After scouting locations around Colchester, all the participants performed their rites and rituals to a schedule throughout the day so that we could all view each other’s work in progress. The variety was amazing, from marking space to dancing en masse, casting spells and performing poetry from trees, climbing into and out of a council bin, falling in aged balletic slow motion down a set of steps…

At 11.45am, I set up on the high street, outside Colchester Castle, to perform both the act of writing and also to write.

Writing is not usually a visible or performative act. It is done alone and to no fanfare. In parallel with the workshop theme, I had to think how to make it be seen.

So in a nod to Colchester being Britain’s oldest recorded town by the Romans, I turned my GILF Island lei into a crown and taped my notepaper together to form a scroll that would flow down the steps and into the street. 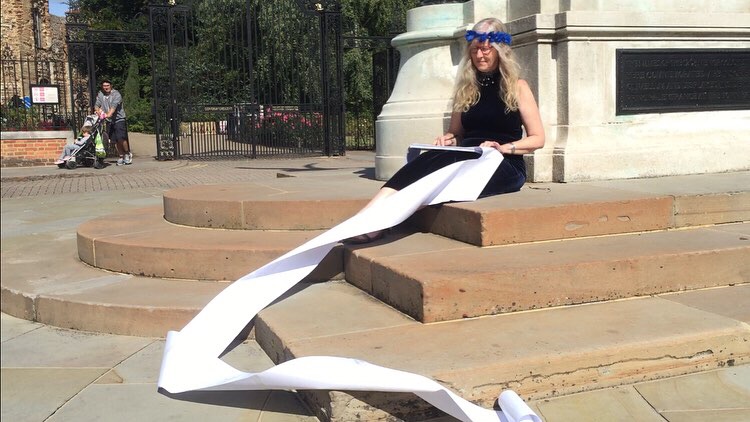 It was not really me but a character that stepped into the spotlight: an ancient Roman scribe making herself and others visible through the act of recording them. Passers-by, watchers and interactors were all entered on the register. I looked at them directly and wrote them into existence. Surveillance by scroll. In turn I was videoed and photographed by the photographer.

I think it looked elegant and potentially thought provoking, and in line with Vortessa’s suggestion of ‘radical softness’ and quiet provocation – you don’t have to follow the “tired sexiest tropes of the ageing of the Femme Fatal” or become a “jokey, slapstick, seaside postcard, pantomime thing or a porny caricature”.

The work also tied in with my data privacy interests. The Romans had SPQR as their banner, we have GDPR. Could data collection by scroll be a subversive act?!

Not having done live art before, my two biggest fears were that people either wouldn’t notice the performance or would interrupt it by asking me questions. They did notice. They usually looked away immediately if there was eye contact, such is the power-dynamic when you set up as a performer. You become a potential threat – a far cry from invisibility.

And no one interrupted. If they had, I decided I would write the interaction on the scroll as a true chronicle of events. I asked someone I admired on the course what to do…. and she said: “You could just talk to them and tell them what it’s about.”

When you’re nervous the obvious is never obvious.

My Colchester Chronicles are now sitting at home, a 15-minute time log of people passing by at a place and moment in time. ‘I see you’ means that they were mostly female and mostly older.

It feels as if I could develop this idea further. I like the idea of playing with invisibility and surveillance and power-dynamics. Ageing is something we are all doing but for middle-aged women it is often a frontline experience in a society that doesn’t value them.

Coming from a post-punk generation, my view is that how we deal with this issue is already changing. Modern middle-agers are getting more confident in valuing and expressing themselves, and the fact that GILF Island was even a thing is noteworthy in finding new ways to age confidently.

My own role model for ageing is Ray, a fellow student I met when I was 19 and he was 36. We sat in the back row of journalism school and I nicknamed him Dad while he called me Callow Yoof. He will be turning 70 soon and has had open heart surgery but he is still blatting about on his motorbike and riding horses through the Dutch sand dunes.

I also know a lot of fiery older women. One of the fallouts from doing GILF Island, is that one of them decided to tell me that it was a ‘load of rubbish’ and I should ‘get a life’. (Sometimes other women can be our own worst enemies.) Detractors can be hard to deal with, especially because the female of the species puts herself down enough as it is.

But to be visible is to be exposed. To be vulnerable is open up a dialogue. To put yourself out there is to put aside the shame that usually holds you back and makes you say “I can’t”. To put your head above the parapet is to act and get real about the things you care about.

So art happened. I made my debut as a live artist. It made me break out of my usual quiet writing life and ‘appear’ as if from nowhere. It was an act of activism and feminism. It was elegant. It provoked an angry reaction. And it has created a network of interesting older female artists for potential collaboration in future.

Thank you to Ade and Derek for hosting me, for scroll provision and for walks in the Tollesbury marshes. And thanks to everyone else who has said positive things and supported me in giving this a go, especially Pete, who has talked me down from anxiety and fear several times in the lead up.