Here are the quick links to my Blogger’s Style Guide, which I've posted over on my Subs' Standards blog as a series of 10 posts.  This is the ‘how-to’ that I give to my company bloggers when they start writing posts for their employer’s blog. It acts as a support document for those who know their subject well, but know little about blog writing or publishing in general.

Of course, what happens after the raw copy comes in is a whole 'nother series about content and blogger wrangling.

I'm also finding that this is overlapping with my Content Strategy work so I'm hoping to add posts on #CSforum10 here on this blog soon for those interested in the Content Strategy Forum in Paris last month.But I'd rather do it in context of my ongoing content strategy audits rather than just report back on the event so need to sort some permissions first. 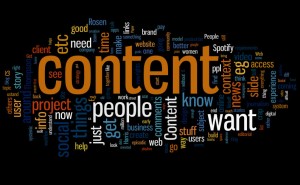 I took 16 pages of notes at SXSW Interactive festival this year. It's hard to get your head around all the difference panels, talks, core conversations and notes-to-self but I think this Wordle shows something of what I was getting from and attending at South By in 2010.

It's particularly interesting that the top three words are: 'Content people want'. I guess that's the key and secret to online enterprises.

There is more to blog tomorrow ahead of the long plane ride home. PS. You can click on the link to see a larger version of the Wordle.

Later today I'm off to my fourth World Travel Market, held annually at London's Excel every November. Around 50,000 travel industry people attend each year. In 2008, 187 countries and regions set out their stall, filling up 43,000 sq m of space. Last year there were stage shows featuring folk dancing from Kazakhstan, Thai massages on the Thailand stand, saki hour via Japan, Uri Geller breaking spoons with his mind on the Israel stand, and so on. This year, no doubt, there'll be more of the same and on the same grand scale for although it's a trade-only show, I think is the third largest show currently held in the UK, behind the Motor and Home Show.

This is the second vast conference I've attended this year. The first one was SXSW Interactive, a five-day event on all things interwebbie, in Austin, Texas – I tried to blog about my SXSWi but most of it remains in my head. Will see what stories WTM 2009 throws up.

If you're going to WTM, and would like to meet, the best way to make contact with me is via Twitter: @fionacullinan. I'll be checking it and tweeting from it throughout Monday and Tuesday.

My plan for Monday press day is:

My plan for Tuesday seminar day is:

Sometimes schedules go astray and I'm happy for this to happen in the accelerated serendipitous environment of a digital WTM. Because the other main reason I'm attending WTM is to put myself out there for blogging work, either corporate blogging or creating content for tourist boards and travel companies. I've been doing this for a large non-travel organisation on the subjects of innovation and entrepreneurship but would love to do it in the sector I'm passionate about and to combine it with my love of digital content.

WTM tip: find good writers
In the WTM PR manual there's a tip sheet for companies to get the most out of WTM. Point 5 says this:

Twice in the last year, I've been told by leading travel editors that there is no longer a freelance budget for travel articles. Well, it was hard enough to make a decent income from travel writing before. Now it seems impossible. The newspaper industry is still where PRs are concentrating their efforts and, increasingly, 'influential' travel bloggers – neither of which offers much of a business revenue model for the travel journalist.

A future travel journalist business model?
But I think PRs (and travel companies and travel journalists) are missing a trick. With traditional outlets shrinking, there is a market for creating content direct for the companies and tourist boards. They need someone (a digital journalist would make sense!) to tell their own stories and put them out there to be picked up directly by prospective clients, by editors and by search engines.

They need to, as WTM suggests, find good writers to tell these stories for them and put together a package of content that helps a prospect decide whether they want to visit that destination or book that tour – essentially, write, photograph and video the kind of things a travel journalist would research as a matter of course, adding value to their offering by being useful to the client. And why restrict this content to the occasional press article; why not magnify your offering by hosting them on your own travel sites. If they are good, other sites and blogs will link to them.

For more information on this, check out my comments on where travel journalists might progress to on Travel Blather's post about paid for content and objectivity. It's not that I'm giving up on 'objective' travel writing for print, just trying to find a new ways to work, because increasingly the old ways aren't working.

Eh voila. C'est tout. Off to learn how to use a Flip camera now. See you at WTM.

It looks like I've reached that moment in a blogger's life when you log into your poor neglected blog(s), make apologies to folks for the lack of posting, explain why and then make a new promise to report back a bit more often in future.

Except… as Neil Gaiman once said (not sure who actually coined this): 'Never apologise, never explain.'

Sooo, suffice it to say, that I have spent the last year in transition in many, many ways. One of the biggest changes has been going permanent on digital 'stuff' from a 20-year background in print journalism. How did this happen?

Well, in February 2008, I started a blog in my spare time (What to wear where), a good idea but ill-carried out by me while I got to grips with Web 2.0 changes.

Then I started Subs' Standards in August 2008 – all about sub-editing and its changing nature in the digital world – and started to get the hang of things a bit more, thanks in the main to Pete Ashton's free social media surgeries. I'm well overdue to post on that blog, too, as I'm now only very occasionally subbing, and it's digital subbing at that – which is quite a different type of 'quality control' beast.

Anyways… updating my digital chops late into the night after a hard day in print was exhausting – and salary-free. I did it for three months almost solidly but it got me into Seven Squared's digital team, which was in need of a web editor, back in January 2009. And now I'm busier than ever, corporate blogging for clients and producing a variety of digital work from ezines to SEO features.

Going to SXSWi back in March 2009 also gave me a load of context for working purely online, as well as a whole load of new ideas for playing with online content plus a contact book full of innerestin' webby types from all over the world. I recommend it for anyone working online and trying to get their head around the bigger picture. (And yes, before you ask, it's also a big festival with lots of bands and parties in the rather cool uni city of Austin, Texas.)

Unfortunately, working long hours in Seven's digital bunker means I have little time to 'rawk SXSW' and so change has come again.

From October, I'll be living and working in Birmingham, with my blog mentor Pete Ashton, as it happens. Turns out romance can blossom in the blurry gaps between online and offline.

I'll still be corporate blogging for Seven Squared's digital team, I hope, and maybe writing an SEO feature or two. And before I leave London I'll also be joining a great new event (and site) for brand managers and those who represent a brand online, courtesy of Jo Geary – and maybe even guest-blogging on there if she'll let me.

But for now I just want to say that I'm looking forward to the next era – to meet new people in Brum, and give myself some headspace to decide which projects to start/play with/experiment with in the West Mids, which seems to be something of a hot bed of  'social media' goings-on, if the SXSW rival WXWM, the new FAILcamp and other such events are anything to go by.

I'll also be looking for blogging or other content creation work, probably in the commercial sector, or quality control work for corporate clients. If you think you might want something like this, please do get in touch.

So, life has switched and instead of working in London and visiting Brum at weekends, I'll be working and thinking  in Birmingham instead and visiting London for work days here and there, and sociables at the weekends. So if you're in either vicinity, find me online (@fionacullinan if you're on Twitter) and come say hi.

As they say, change is inevitable – except from a vending machine.

PS. (I'm a serial PS blogger.) Apologies if you get this 10 times in your feed, my WordPress preview appears to have karked it.