"My mother recently discovered a pile of these local interest newspapers in her loft. Mum helped on Snooze and was part of the Stirchley Community Action Group. I also helped a little on Snooze, occasionally, with typing and layout…"

Now, I also helped on Snooze – as a 15-year-old local Stirchley schoolgirl who had a vague idea of one day becoming a fancypants, hi-falutin' journalist. My bezzie mate Tracey and I compiled the back page section. We called it Hot Gossip and basically filled it with immature jokes, droodles and general silliness.

But I've been waiting with some trepidation for the issue to come out with my first attempt at 'serious journalism' – or that's the way I remember it. It involved going down Stirchley High Street and counting the number of different restaurant types, doing an interview and writing up a special report.

Well, finally the issue has been posted online but it's hardly the in-depth article I remember. 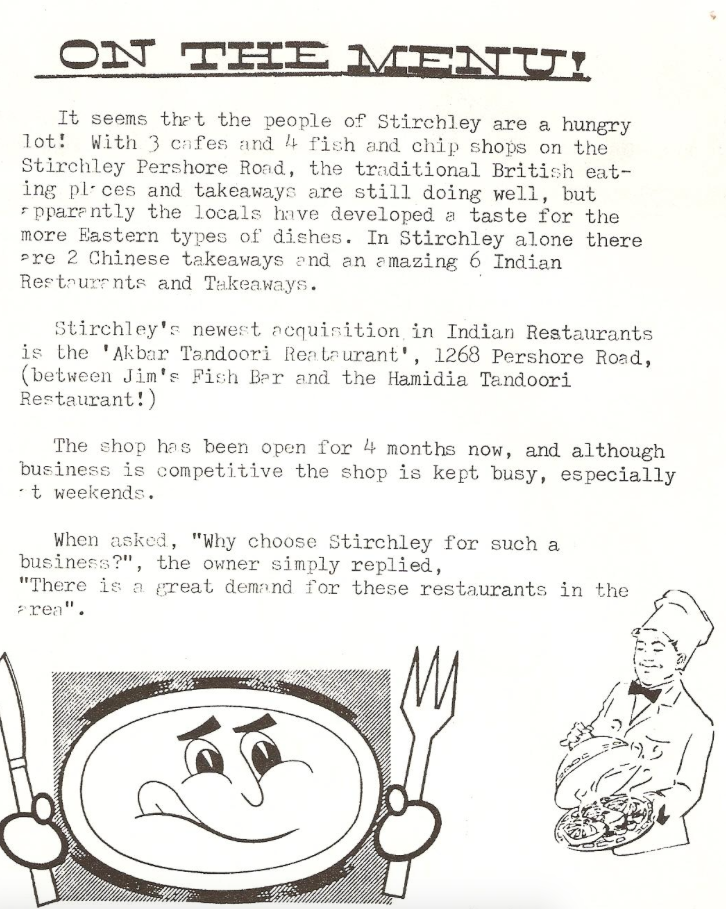 It's a total imitation of what I thought a journalist might write. But short on any actual facts, data and interesting quotes. (Cue embarrassing lol.)

But, you know, the spelling is perfect. It's no surprise that I went on to specialise in sub-editing when I actually did become a journalist three years later.

Far more cringe-worthy, if you scroll on through Snooze Issue 5, is my opinion piece on the vandals in Newlands Road park who burnt down the cricket pitch. I must have thought it was top literature at the time – after all, I put my initials after it.

The other major thing that was happening in my world at the time was that I had discovered The Who, Kinks, Small Faces, The Chords and The Lambrettas. I had a fishtail parka, a red alice band and a bob. This may go some way towards explaining the redesigned Hot Gossip logo.

"Meanwhile here are some little men…" 😀

Anyway Issue 5 was obviously the pinnacle for me, as Snooze issue 6 saw Hot Gossip disappear along with any other features by the teenage reporters. I suspect we just got bored with it and moved on to (iirc) Dungeons & Dragons games with actual BOYS.

We all have to start somewhere in our careers. But not everyone is confronted with their awful start point. It seems mine has been logged, archived and come back to haunt me.

NEWSFLASH: Stirchley is getting a new magazine called The Stirchley Knows – check out Place Prospector on Twitter for news of how to get involved in the layout, design and content.