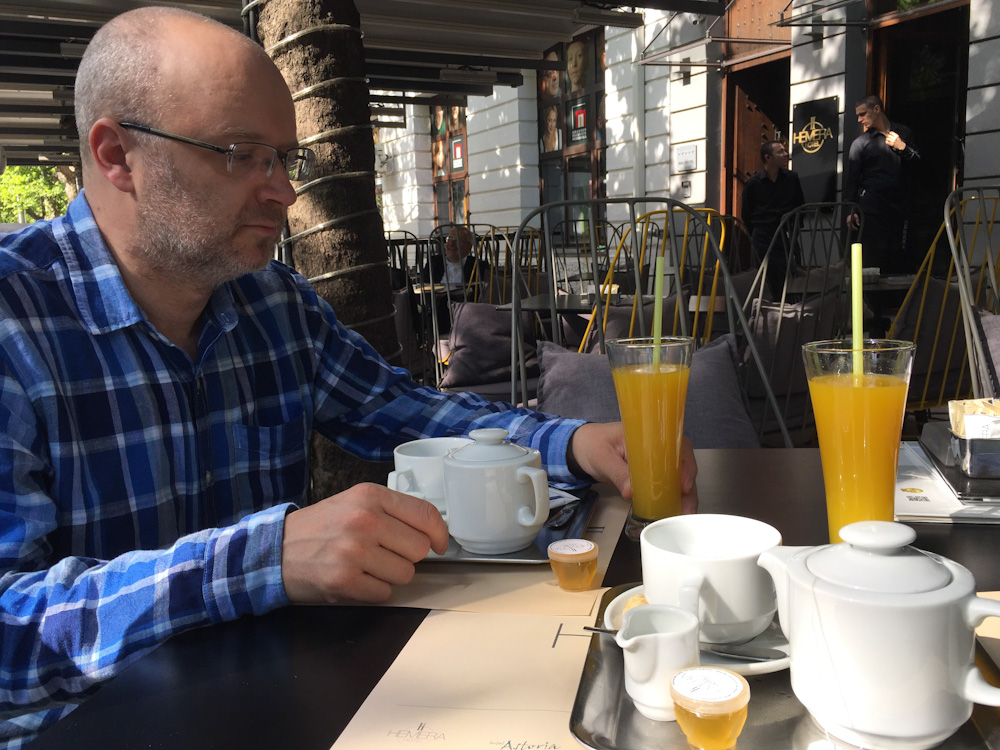 A bit of perspective arrives overnight and my appetite comes back for a full English breakfast out on the Hotel Hemera's street terrace. No generic continental breakfast buffet here.

We have one hour to look around Podgorica's sights – a bridge, a river, a statue of a Russian rock star – before we have to get to the bus station. Our local street of  bars and cafes, which closed around 3.30am last night, are all open and packed with people by 11am. 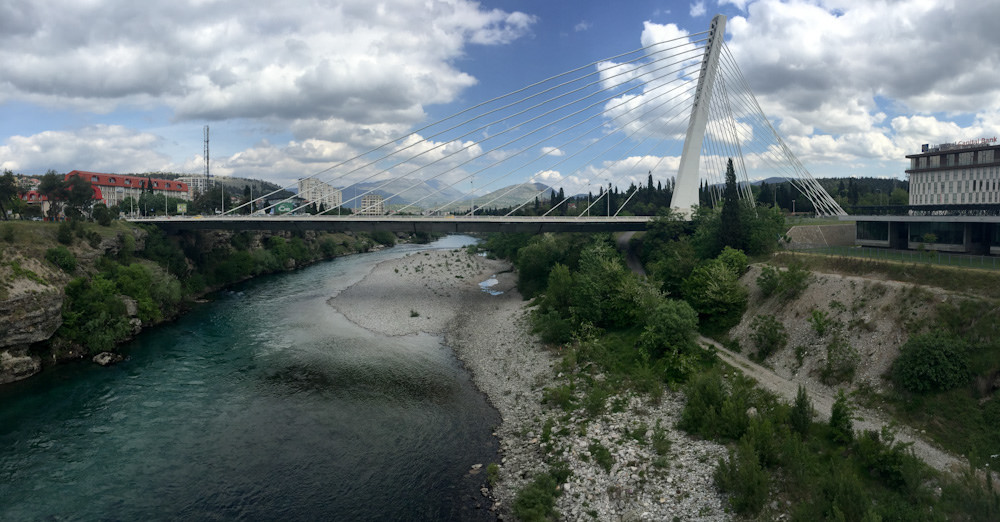 Our bus to the Bay of Kotor takes a 2.5-hours and the journey is a pretty one with snow-capped mountains, Lake Skadar in the distance and dizzying views down to Budva and Sveti Stefan beach resorts. We arrive into Kotor into an apartment overlooking the jade green bay and the Old Town, and sit on the terrace. We have a whole three days here.

One week into the trip, the holiday feels as if it about to begin.

It's 24 degrees and we are wearing shorts and sun cream and sun hats. This has been the hardest trip to pack for: just a week ago I was up in the snow-covered Alps. We spend almost all day at 'home' in our Muo apartment, lounging and reading and writing and admiring the fjord-like Bay of Kotor and the Unesco Heritage Site of Kotor with its walled, almost triangular Stari Grad (old town). 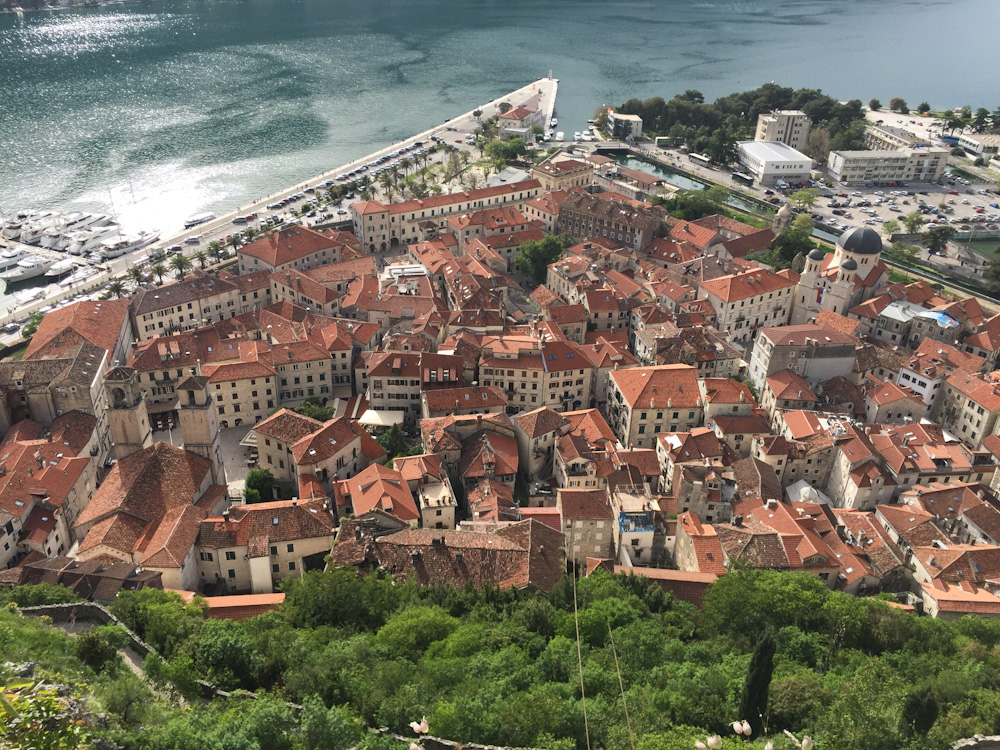 We are about to leave the apartment when Pete gets the news that his Arts Council England grant application has been successful, which means he will have his first solo exhibition this autumn at Birmingham Open Media. We celebrate by hopping a one-euro 13km bus ride to Perast, a small Venetian-style village further up the bay, for an afternoon beer and sandwiches by the waterside.

A cruise ship enters the bay on its way down to Kotor, ready to disgorge several thousand people into its tiny port. We have learnt to timetable around them and I'm relieved to be in quiet Perast, wandering its tiny alleyways and stone staircases, while Pete 3D-scans a church square bust. Such is our life. We often enjoy our own little worlds, like our rabbits, each somewhere in the vicinity of the other.

No cruise ships today so Kotor Stari Grad is clear and we can explore at our leisure.

In truth I am ready to go home; yet when I am home I dream of being away. Both realities are perhaps tainted by a rose-tinted perception of reality.

Yesterday I came across another younger backpacking Brummie called Fiona on YouTube who is travelling for three years (as I did at the end of the 90s). I think of her at the future version of my past self – except she is vlogging her travels, advice, inspiration and reassurance. I simultaneously I admire her and think that I can't go back in time to my own days cross-crossing Asia. I don't envy the pressure she is under having to serve up daily content to an audience of followers. I remember how great it all was but now find myself annoyed by the narcissistic, self-focused, singular, young backpacker's viewpoint. And yet… so fascinating and familiar that I think I must hate myself.

Solo travelling felt (still feels) like such an achievement for me, a shy Brummie who fell surprisingly in love with solo travelling as a teenager on a US road trip, enough to later hit the backpack trail to India, Nepal, Sri Lanka, South-East Asia, Australia, New Zealand…

Travelling opened up my eyes to new lands, people, religion, cultures, perspectives, politics, ways to live, ways to die, ways to think. I even learned the value of my own country when I had the chance to leave it permanently. And later I began to change how I moved through the world, more aware of the impact of travel and tourism, and my own privilege involved in traversing someone else's land. Travelling humbled me in many ways.

So the other Fiona, the one I found myself watching dispense travel wisdom on YouTube, arrived as an echo from another time and place. She reminded me that I am no longer her and can't go back to that youthful time and place. That is her present, my past. I am now a traveller who has to some extent settled down. And that makes me question who am I without it? Is there such as thing as being a 'post-traveller'? How do I travel now, if at all?

Other Fiona is asking for volunteer vloggers to expand her coverage and I'm tempted to offer as Future Fiona – a potential talking futurehead from two decades on. Or just leave her to get on with it. She'll figure it out.

Meanwhile, back in the present, I am caught in another time travel loop of see my own future 24 hours ahead. I have connected with a friend's Instagram friend who was in Belgrade, took the train to Podgorica, and arrived in Kotor a day before us. Each day I check her Instagram feed to see where she has gone, before posting variations of her photos a day later. She is currently staying across the bay in Dobrota and that we have probably taken a shot of each other's apartment. I wave and wonder if she is waving back. From this yester-stream I know we will be climbing to the Kotor Fort and I find it comforting to folllow in a future traveller's footsteps, at least until the near connections across multiple dimensions via the internet start to melt my brain, for behind us, Hannah and Myk from our Belgrade dinner, will be following us a few days behind. 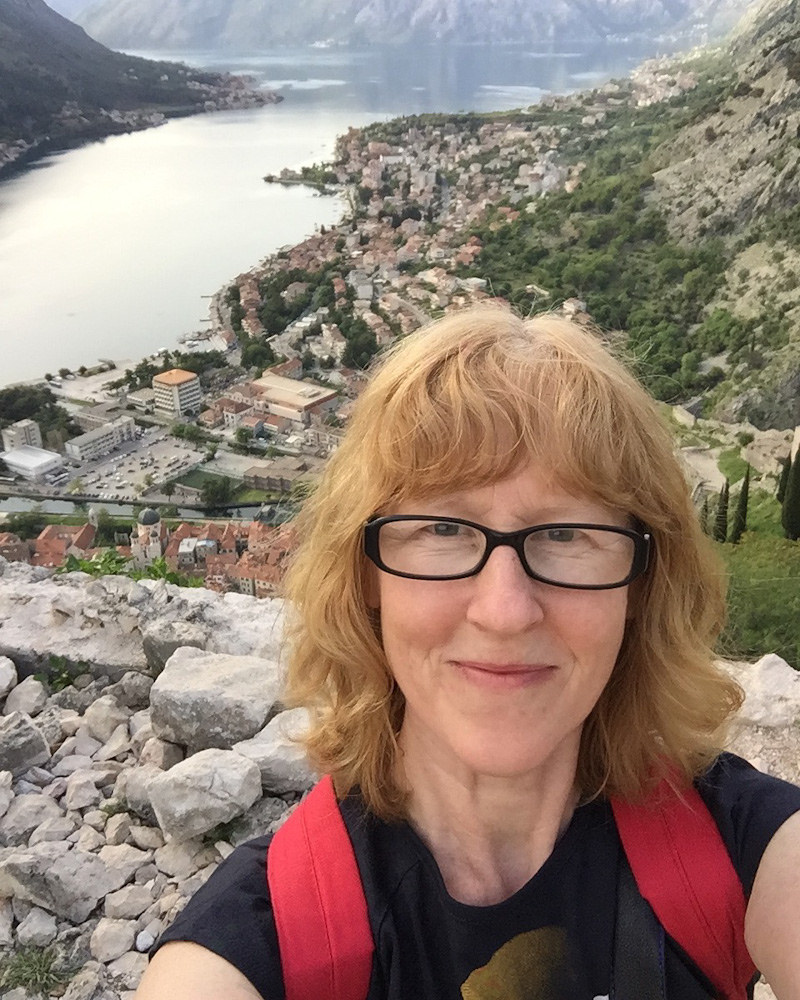 Climbing the 13oo or so feet up cliffside steps to the Fort is painfully slow but we press on despite the jellylegs and panting for breath. I'm nearly 50, losing my balance and not the fittest but I did it. I got all the way to the top, where the mountain goats frolic and the kids graffiti and the soda sellers sits. I can still do it. I feel good.

At dinner, we toast scaling the beautiful mountains of Montenegro, the success of Pete's funding and the longevity of us – eight years together, coming up to three married. Achievements.

Tomorrow we cross our final border and my eighth country of the tour, into Croatia. As with all journeys, it feels as if it is ending before it has ended.